The crash between two driverless robot buses in Rotterdam on Tuesday 6 December was caused by a human error, reports Connexxion.

In the days after the accident with the two unmanned buses, which bring commuters from a metro station to an office park, an investigation has revealed why the buses hit each other on the one-way bridge. The log files of the system show that a communication error occured shortly before the accident in one of the two buses. Usually this does not lead to an unsafe situation, and the system of the broken bus reacted appropriately by stopping the vehicle to wait for the problem to be resolved. The broken bus was stopped on a one-way bridge with two other buses on the other side waiting to cross the bridge in the opposite direction.

Operators of the system then remotely restarted the system and accidentally released the road over the bridge to the two waiting vehicles on the other sides. All buses started to drive, thinking that the bridge was clear, but they made a full frontal hit. The obstacle-detection system worked correctly and started to slow down the buses, but as the two were moving towards each other the breaking distance was too short and the buses collided. 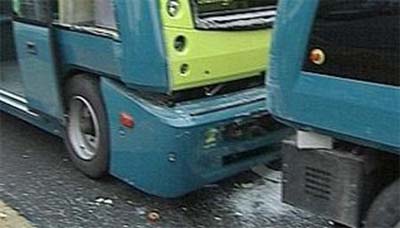 This entry was posted on Saturday, December 17th, 2005 at 11:03 am CET and is filed under Life in Holland, News, Science & technology with tags . You can follow any responses to this entry through the RSS 2.0 feed. You can leave a response, or trackback from your own site.