Our visit to Jodhpur, India

We spent three days in Jodhpur, Rajasthan India in March 2006. Jodhpur, sometimes called the Blue City, is home to Rajasthan’s most magnificent fort, Meherangarh. Besides visiting the fort, we also visited the countryside where we learned about the Bishnoi tribes and their way of life.

We took the Kolkata Jodhpur Express train from Bikaner to Jodhpur. The ride through the Thar Desert was about six hours long, and in AC2 class, very comfortable. Other passengers spent the time dozing, but we kept our eyes on the passing scenery. Chinkara and Indian Peafowl dotted the landscape.

We arrived in Jodhpur just before 6pm and were met on the platform by richshaw wallas looking for custom. When we said we didn’t need a ride, one driver mumbled that we must be staying at the Govind Hotel, and he was right. Walking from the station, we followed the easy directions given to us by the hotel and found it with no trouble. The hotel staff was extremely friendly. We arranged our excellent village safari with them. Our room was good-sized with air conditioning and two fans, and television with several local channels. The bathroom was clean and hot water was available whenever we needed it.

We ate two meals in the rooftop restaurant and both were less than stellar. Our pizzas were fairly inedible and smothered in a strange, sweet-tasting cheese. Breakfast of pre-jammed, super-flat toast was also a bit of a letdown. The atmosphere there is relaxed though and other diners did seem to enjoy the food.

The Bishoi are a tribe of people who live in the Thar Desert around Jodhpur and worship nature.

Our first stop was at Khejadali village to see the memorial to the 363 activists who were beheaded in 1730 in order to save their sacred khejri trees from the maharaja’s axe. Here we saw some Nilgai and Indian Peafowl. Arthur also spotted a Black-Rumped Flameback woodpecker, or “carpenter bird” according to our driver. 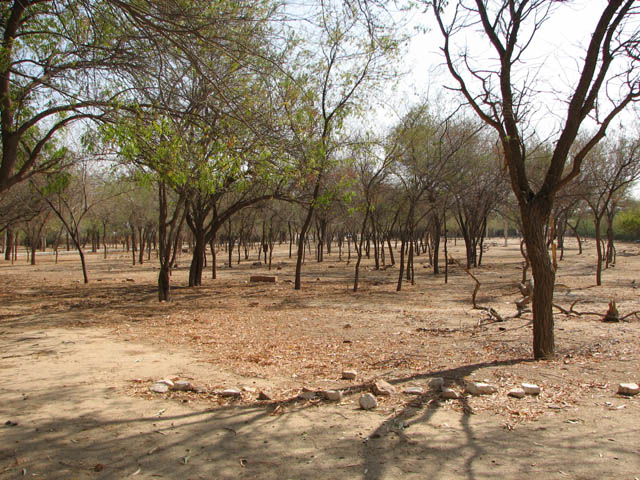 The memorial was set in a lovely park

Our next stop was to visit a Bishnoi family where we saw their traditional home and their way of life. We had a cup of yummy sweet Indian tea and were offered some opium, which we politely refused; our driver did not! Arthur tried his hand at hand grinding millet into flour. The patriarch was very interested in Arthur’s freckles!

The family showed us the July 2005 (?) issue of Time Out Jaipur, which was a special Jodhpur edition that featured a nice story and photos of their family. The magazine also featured the potter and carpet weavers we would later visit.

Our next stop was at a potter’s shop, where we watched a brief demonstration of pottery-making before Arthur got his hands dirty trying to spin the heavy wheel and making a pot himself (“30 rupees at the Jodhpur market”). We bought a few trinkets there. 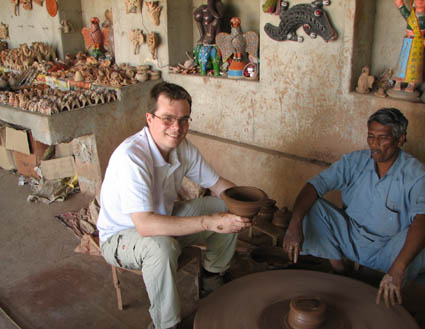 Next door to the potter worked a block printer, who decorated sheets, tablecloths and wall hangings. We saw a small demonstration of his craft and bought two small samples of his work (square tablecloths). 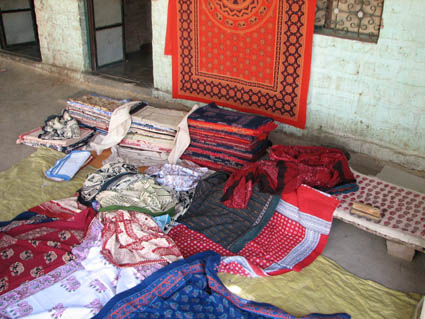 At our next stop we had lunch in a small hut where a family of weavers worked and lived. The man of the house put two large bricks on the ground and rested a plank across it. Then he covered the plank with a cloth and placed a small rug on the ground. He motioned for us to sit and then left the hut. We sat on the “bench”, but when the man returned he laughed at us and motioned us to sit on the ground. We had been sitting on the dining table!

We were served greens from the khejri tree with a spicy mustard sauce made with milk, gritty millet chapatti bread and spicy red curry sauce. It was quite delicious and unlike any other food we had tried on the trip. I made a big pig of myself, taking second helpings of everything, including the curry which made my eyes water tremendously.

We watched a brief demonstration of the rug weaving process, and then were shown lots of lovely carpets. They were quite nice but we didn’t really need a rug anywhere in the house so we politely declined to make a purchase, our excuse being that the rugs were too big. After successively showing us smaller and smaller pieces, the man of the house finally brought out some very small examples of only about 12″ square. We bought one.

Before we left I asked to use the toilet. I was asked to follow a young girl to the back of the house, to their attached squat-toilet outhouse. There were a couple of water buffalo standing in the doorway of the toilet, who had to be forcefully pushed aside before I could use the facilities. 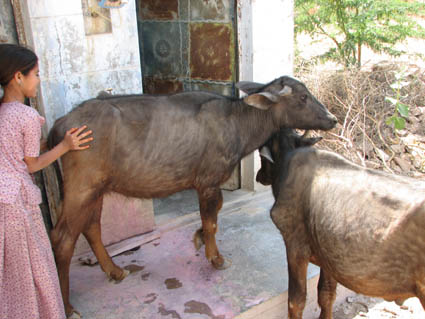 Driving through the desert today we saw lots of chinkara and the driver was kind enough to stop a couple of times so we could take pictures. Once we also saw a blackbuck far in the distance. 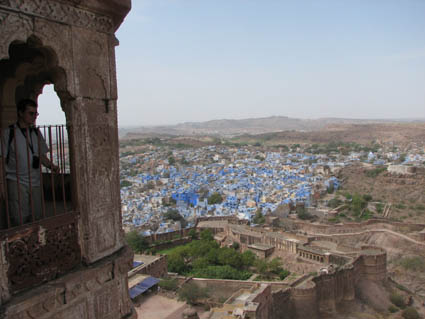 View over Jodhpur from Meherangarh Fort

We visited the majestic fort of Jodhpur for about four hours on Monday, 20 March. Our entrance ticket included an outstanding audio guide, which we enjoyed very much. The fort is on a cliff 125 meters above the city. Construction began on the impressive monument in 1638, though there was a fort at the location as early as 1459.

Although our time in Jodhpur was short, we enjoyed our stay. The fort was easily the most impressive one we saw on our trip; Rajasthan is full of Rajput forts. The village safari was one of the few opportunities we had to visit people outside of the bigger cities. Jodhpur is one of the most visited cities on the Rajasthan tourist trail, with good reason.

This entry was posted on Wednesday, May 3rd, 2006 at 6:38 pm CET and is filed under Travel with tags . You can follow any responses to this entry through the RSS 2.0 feed. You can leave a response, or trackback from your own site.

Hello Amy,
I visited India last year and visited the beautiful thar dessert, with my parents. The thing is: we visited the same family/ house which you have and afterwards I wanted to know where te village was situated or what the village was called. Unfortunately I was already back in Holland, when that question popped out! So maby you heard or saw the name of the village where that family lived. Thanx already for reading/ trying to remember or even mailing me back!
Greetings Caroline de Wit, Utrecht, Holland

I am going to introduce Bishnoi a little bit in my website relating to vegetarianism/animal rights, may I have your permission to use some of your photos taken over there along with the article? I will link back and credit the photos to you^_^

Read your note today on visiting Bishnoi villages, and want to know if you will like to be involved in 280th anniversary of the 363 Bishnoi men-women who gave away their lives to protect green trees in 1730 near Jodhpur, a few events are to be organised and a publication to be brought out? Any connectivity from your region will be appreciated.
I am in to conservation and organise annual Bird Fair at Jaipur’s Man Sagar lake, 14th to be held in Feb 2011.
Regards.
Harsh Vardhan