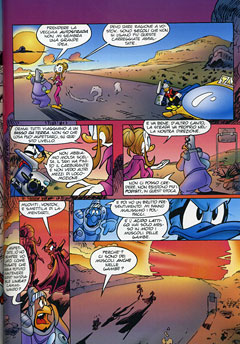 PKNA was targeted at an older audience than most of Italy’s Disney comics, and immediately was a huge success. PKNA’s refreshing style set the stage for a slate of new modern Disney comics from the Italian publisher, including Mickey Mouse Mystery Magazine (1999) and W.i.t.c.h (2001).

After 52 issues, PKNA was followed by two other series, but these never reached the success of the first one. PK2 (18 issues, February 2001 to July 2002) was rejected by PKers for various reasons: the omission of important characters (including Uno), simplified plots and the stories focused more on Donald’s social life than his career as PK.

A third series titled PK Pikappa was launched in August 2002 and lasted for 32 issues until it was eventually canceled in March 2005, but this series too was poorly received. Fans critized the low quality of the stories, but they were especially upset by a fundamental change to the character. In an effort to sell the PK series abroad (where Paperinik was virtually unknown) and tie it in with the video game Disney’s PK: Out of the Shadows, the Italian publisher decided to make some fundemental changes to the origins of PK, which upset the fans.

A fourth series in Italy, titled PK Reloaded, reprinted 24 issues of the original series, but when that was stopped in 2007. It was the end of PK.

The more than 100 long adventure stories of Paperinik have been reprinted across Europe. Here are a few more stunning PK covers from different countries. From top left they are from Norway, Finland, Germany and Sweden.

This entry was posted on Saturday, September 26th, 2009 at 3:13 am and is filed under Italy, Spotlight. You can follow any responses to this entry through the RSS 2.0 feed. You can leave a response, or trackback from your own site.

Disney Comics Worldwide is an unofficial website with information on Disney comics and magazines from around the world. With approximately 50% of the market, Disney is the largest publisher of children's magazines and comics (excluding manga) in the world!