Looking for injured birds in Chicago

Posted on April 15th 2010 by Arthur in Birds, Chicago, Nature

On the last few Thursdays we have been volunteering with the rescue and recovery of injured birds in downtown Chicago. We do this with Flint Creek Wildlife Rehabilitation, which organizes rescue and recovery twice-yearly for 10 to 12 weeks during bird migration. Thousands of birds strike Chicago’s tall buildings every year as they migrate through the city. The stunned birds fall to the ground where they lie unconscious and risk being eaten by gulls, stepped on by pedestrians or dying from their injuries. Teams of volunteers go out every morning during migration to look for injured birds. They probably only find a fraction of the birds that hit, as many of them will fall on awnings, ledges and rooftops. Fortunately, about 90% of the birds rescued by volunteers from Flint Creek recover after treatment and can be released back into the wild. This is a great program.

Another city that I know of with a similar program is Toronto, where since 1993 FLAP volunteers have picked up over 44,000 birds from 162 species!

Today was our fifth time. We got up at 3:45am, left the house at 4:00am and arrived in Chicago at 5:00am. It is nice to see that many of the buildings in Chicago have their lights turned off during these migration months, which is an effort that has helped reduce bird strikes in the last few years. We drove and walked around Chicago’s downtown loop until about 7:30am today. It’s a large area to cover, so we run around a lot, with our large net, flashlight and backpack full of paper bags. Amy and I also carry walkie talkies which makes it easier to split up and cover different parts of a building and stay in contact. We try to do the buildings that we have to check along the Chicago River before the sun comes up and the gulls come out, as they are known to snatch up injured birds right in front of rescue volunteers!! Flint Creek has provided us with maps of the City. There are over 125 buildings on the map marked in pink, and these are the buildings that we need to check. This is a huge area, so we’ve split the area up in three parts. Amy and I do one part and two other volunteers do the other areas. 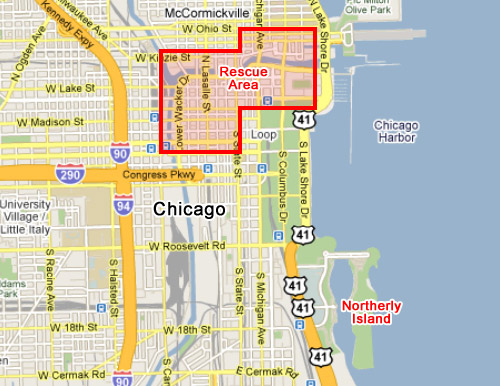 Flint Creek has two locations in the suburbs and a facility at Northerly Island. This last place is only a 10-minute drive from downtown (see map above), which is great for the birds! Timely treatment is important to survival rates and bringing them to this nearby location increases their chance of survival. After finishing our route we call our two teammates and check if they found anything. If they did we swing by their locations to pick up any bags with birds and then head to Northerly Island, where a triager takes care of them. This morning we found a live Yellow-bellied Sapsucker (see above) and dead Palm Warbler (see below). Fortunately, we have not found so many birds yet on our days. I don’t know whether it’s still too early in the season, if it’s the weather or if we haven’t been looking in the right places. In any case I’m happy when we find less birds as that means more birds made it through Chicago without hitting buildings. For more information about rescue and recovery in Chicago see the Flint Creek website. For the Toronto program see FLAP.org.

Posted on April 7th 2010 by Amy in Funny, Nature, Weather

I can’t believe it, but the forecast for tomorrow is calling for a wintry mix – that means SNOW! Why, just last week our neighborhood squirrel was too hot to even stand up straight! 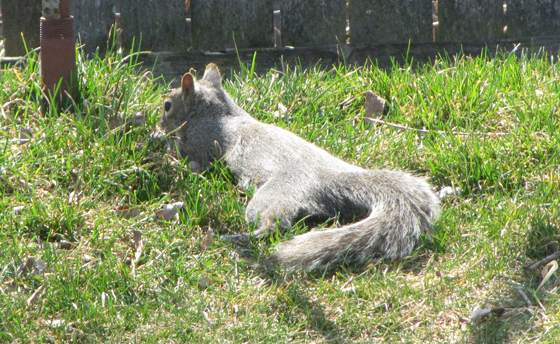 We watched this cutie scoot around on the ground for a while, foraging and eating while remaining flat on its stomach. 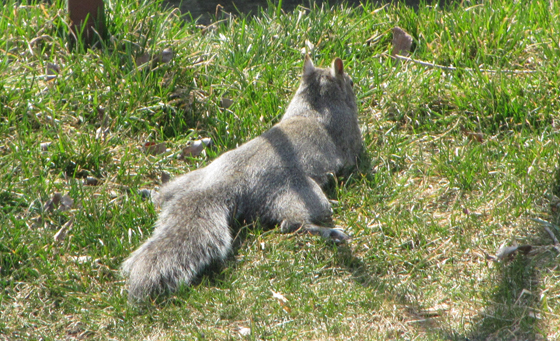 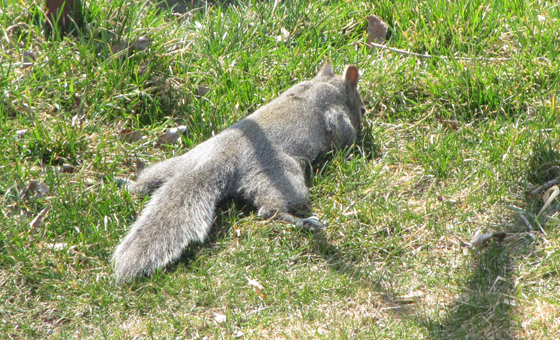 In the end she scampered off, so we think she was just trying to keep cool.

If you think this is cute, you won’t believe what I got to do last week – feed a baby squirrel!

Charging for incoming texts should not be allowed

Posted on April 2nd 2010 by Arthur in Life in America, Science & technology

A major difference between Europe and the US when it comes to mobile phones is that carriers in the US charge their customers for incoming calls and text messages while in Europe they don’t. If I get a 10-minute call from someone then 10 minutes go off of my allotted plan minutes. And if I receive a text message I have to pay for it, or it goes off of my allotted messages for the month.

I don’t have a messaging plan on my AT&T phone, so I pay $0.20 for each message that I send and receive. I don’t mind this because I hardly use text messaging, but lately I have been getting more and more spam messages and ones with some random words from numbers I don’t know. This is extremely annoying because AT&T charges me $0.20 for each of these.

Why does the FCC even allow this to occur? Charging for incoming phone calls is okay, I guess, as you can simply not pick up if you don’t recognize the number, but text messages just arrive and there’s nothing you can do about it. Someone could send me 1,000 text messages right now and I’d have to pay $200 for them. This should not be allowed!

I called AT&T and the representative told me that I can block up to 15 regular phone numbers on my account. Why only 15? If this trend continues I’ll soon get unwanted text messages from way more than just 15 different numbers. Fortunately, AT&T allowed me to completely block my text messaging capabilities. I’ve read about other carriers who don’t have this option and customers are forced to receive these spam messages and pay for them. I can’t believe the FCC allows this. Imagine you’d have to pay for each spam email you receive or unsolicited mail you get delivered to your home. That’s ridiculous!

AT&T and other operators in the US should really stop charging for incoming text messages (as is the case in most of the world!) or at the very least allow their customers to keep a list of numbers from friends and family that they do want to receive texts from and block everything else.