The Owl and the Nuclear Power Plant

Last month Arthur and I were dispatched to the old Zion nuclear power plant on behalf of Flint Creek Wildlife Rehabilitation in response to a Great Horned Owl that was stuck in the generator building. This was about two weeks after the March 11, 2011 earthquake and tsunami that hit Japan and at the height of the Fukushima Nuclear Power Plant crisis. Not that we were thinking about that or anything…

We got the call on Wednesday morning. We provided our details to our contact at the plant so we could be granted access to the facility the next day. When we arrived at the plant, which is along Lake Michigan (see map), we were greeted by a female armed guard who unfortunately had no idea who we were. After consulting with her colleagues, our identities were made known and we were allowed to drive into the compound.

As a first step we got a short safety briefing and learned more about the owl that had been seen for at least three days inside the generator building. Hard hats and safety goggles were distributed and we headed back to our car in order to proceed to the main event.

But first, our car had to be searched. We drove to the checkpoint, left the car and watched a security guard give our minivan the once-over, including using mirrors to check underneath the car. After our car passed inspection, we parked at the generator building and carried our equipment to the next security point. Although we had already given our details over the phone the previous day, and to the main security gate just moments earlier, we again had to provide ID cards and personal details to this latest security guard. He proceeded to telephone our information to another security person who had control over the one-way gated doorway into the main part of the building. Luckily our credentials passed with flying colors and we were allowed to awkwardly shuffle into the building where the owl had been spotted.

Me in a hard hat

The generator building was enormous! Our guide, Angela, showed us where the owl had most often been seen. It would often perch on metal support beams near the ceiling. 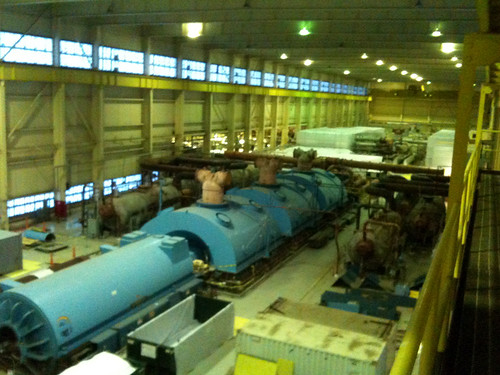 Overview of the large building from the catwalk

While the bird had been seen fairly regularly by multiple plant staff over the course of the previous 3 days, we learned that the owl had last been seen that morning, about 12 hours prior to our arrival. Several of the building’s windows had been left open the night before, and though the owl was seen the next morning, there was a period of about 30 minutes between the last owl sighting and the last window being closed. Chances were good, therefore, that the owl had left the building on his own sometime that morning. There was also speculation that the owl may be one of a possible nesting pair in the building, so we conducted a search. We had taken an elevator up 4 floors to the main part of the building, and then we climbed four flights of open stairs to access a catwalk in order to search the beams for the owl or possible owl nest. 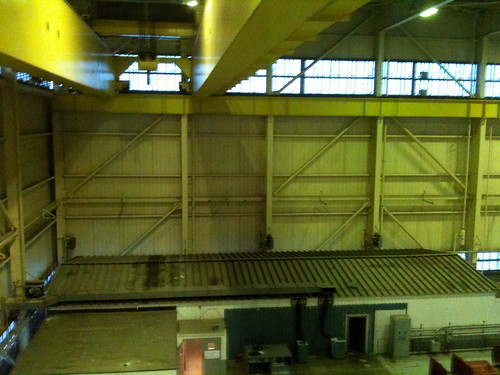 We scanned the beams for any sign of the owl

Our search proved fruitless as no owl was spotted and no signs of a nest were found. We hope that the owl indeed left of its own accord. Even though we didn’t find what we were looking for at the plant, it was a really interesting visit. Neither of us realized there was a nuclear power plant in Zion, although it did sound a little bit familiar to me. The Zion Nuclear Power Station was in operation from 1973 to 1997. The plant is currently licensed to the company EnergySolutions, which is working on dismantling the site. This process will take about ten years. It was EnergySolutions staff that escorted us through the owl search and we learned a lot of things about nuclear power plants that we didn’t know before.

This entry was posted on Wednesday, April 13th, 2011 at 5:59 pm CET and is filed under Illinois, Science & technology with tags . You can follow any responses to this entry through the RSS 2.0 feed. You can leave a response, or trackback from your own site.