Posted on June 6th 2010 by Arthur in Birds, Life in America, Nature

Fourteen months after we put up our first hummingbird feeder, we have finally seen one in our backyard. Yeah! We first put up a feeder filled with delicious nectar (home-made: 1 part sugar, 3 parts water) on April 2nd, 2009. Unfortunately we never saw one all spring and summer last year. And to make matters worse: raccoons often stop by at night to knock down the hummingbird feeder. They’ve broken a few and we keep having to fill them up.

Early this morning, before leaving on a walk at Rollins Savanna, Amy was looking outside when she saw something small fly by our feeders. She didn’t know what it was, but it made a U-turn and flew back to our orange oriole feeder, which has bigger holes than the red hummingbird feeder (you can see both in the picture below). It was a hummer! We watched the female Ruby-throated Hummingbird for a few minutes, as she hovered above the hole, going back and forth to take a sip.

After this joyous moment we ran outside to put fresh nectar in both feeders and Amy put up her Wingscapes Birdcam to see if it the bird would come back later in the day. At the end of the day there were over 1,500 pictures on the camera!! Most of them were of an empty feeder; the cam takes pictures of movement and the feeder had been blowing in the wind all day. 1,499 of the pictures had nothing on it … but one did! 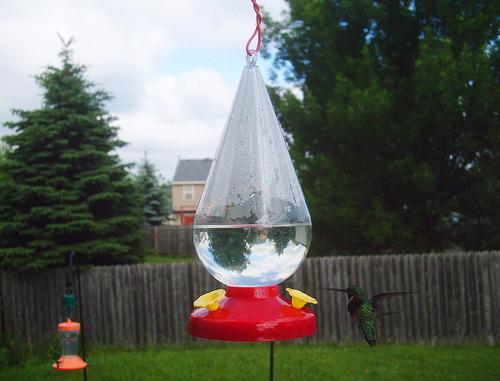 It’s hard to see, but it looks like this one has a dark chin, which means that it may be a male. That would mean we had a whopping TWO hummingbirds in our yard today! 🙂

We’ll keep the cam on the hummingbird feeder for a while, now that we know there are some around here. Hopefully we’ll get better pictures one day. 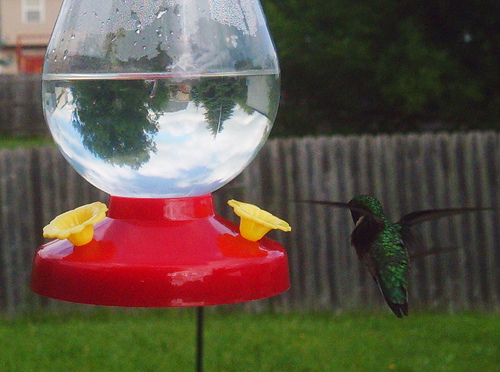