Fox has made a huge mistake. This week the extremely hilarious sitcom Arrested Development was sadly cancelled again, and FOX has reduced the episodes for this third and final season to 13. Sign the online petition at petitionspot.com to save Arrested Development!

Arrested Development is one of the funniest shows ever made. It was nominated for 7 Emmy awards in 2004 and it won five. Then it got cancelled in the second season, but it was nominated again for 11 Emmy’s in 2005 and it won seven, so FOX picked it up for a third season. But unfortunately ratings have apparantly not been high enough and they are cancelling it again. 🙁 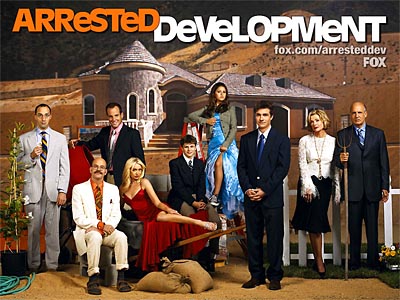 This entry was posted on Sunday, November 13th, 2005 at 1:38 am CET and is filed under Pop culture, Television with tags . You can follow any responses to this entry through the RSS 2.0 feed. You can leave a response, or trackback from your own site.

if you cancel this show you will be making the biggest mistake! too many people like it across the world to cancel it. i will cry myself to sleep every night until it will air again…

this is ridiculous! This was perhaps the funniest show ever and fox cancels it!?? How is this even possible after winning a bunch of emmys? Fox is a pathetic excuse for a company and i am hereby banning them from my television until “arrested” is put back on!

That’s ridiculous! I can’t believe they’re going to cancel one of the best shows ever! Seriously, don’t they know what good television is? I hope they realise what a terrible mistake that would be… hopefully they’ll reconsider again…

Just can’t understand why Arrested Development keeps getting cancelled! I think it’s one of the funniest, well written and acted sit-coms to come out of the States. The characters were all side-splittingly funny and still three-dimensional and the story line was original and well structured. I really hope enough people make enough noise to persuade Fox to reconsider – however unlikely that might be! In England we have a reputation for producing great sit-coms – to me Arrested Development would be up there with any of them – perhaps with the exception of Fawlty Towers and The Office – although the American version was a plae comparison to ours. As for American sit-coms, I also like Curb Your Enthusiasm, Frasier – although A.D. was easily my fave!!

I think it is so stupid that fox is cancelling the show. It just goes to show that they rather show those stupid reality shows than some actuall comedy!