My favorite computer games of all time were the Space Quest and King’s Quest adventures from Sierra On-line. Back in 1983 King’s Quest I: Quest for the Crown was the first animated adventure game ever. The character was moved around the 16-color environment with the arrow keys, and everything else in the game was controlled by use of a text parser (e.g. “Pick up apple”). At the time these graphics were amazing; it may not seem like a big deal now, but seeing the blocky Sir Graham move behind a tree or a big boulder was many person’s first true 3D experience. The eighth and final King’s Quest game game out in 1998 — but this week Vivendi Universal Games announced that they will allow the work on the unofficial King’s Quest IX to continue!! 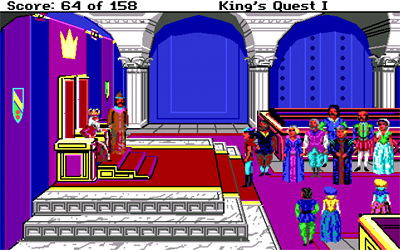 King’s Quest IX, or ‘The Silver Lining’, is based on characters from Sierra’s original King’s Quest series, but it is ‘unofficial’ as it is not endorsed by Sierra Entertainment. The series’ creator Ken Williams has left Sierra and after the mediocre sales of King’s Quest VIII, Sierra has been uninterested in creating another chapter.

Five years ago fans of the King’s Quest series grew tired of waiting for a new chapter, so they decided to make their own. Vivendi Universal Games granted a fan license to Phoenix Online Studios to work on the KQIX project. The group grew to 50 unpaid designers around the world, working online to complete the game. The game was originally scheduled to come out at the end of this year, but it was delayed after Vivendi shut down the project back in October. But after thousands of fans sent emails to Vivendi and united in the Save KQIX campaign, the project was picked up again; on 9 December 9 2005, Vivendi Universal Games announced that they would allow King’s Quest IX to continue!!

The game is designed to be a trilogy and each of the three parts will be released as freeware. The first part, titled “Shadows” is now to come out somwhere next year. The trilogy will be the final episode in the long-running series to wrap up the loose ends left behind by King’s Quest VIII.

This entry was posted on Sunday, December 11th, 2005 at 12:52 pm CET and is filed under Pop culture with tags . You can follow any responses to this entry through the RSS 2.0 feed. You can leave a response, or trackback from your own site.