by Arthur
Posted on Friday, December 30th, 2005 at 10:57 pm CET
See my other posts about Groundhog Day in Woodstock:

Today we visited Woodstock, IL, to see the set of one of my favorite movies, Groundhog Day (1993), featuring Bill Murray. Groundhog Day was filmed here 13 years ago, but everything still looks just as in the movie. You can retrace Bill Murray’s footsteps from Ned’s Corner to Tip Top Bistro to the place where he stepped into the puddle, then across the street toward Gobbler’s Knob in Square Park.

The movie Groundhog Day was filmed in Woodstock because of its quaint and old-fashioned town square. The beautiful Square Park is where the Groundhog Day ceremony takes place in the movie. 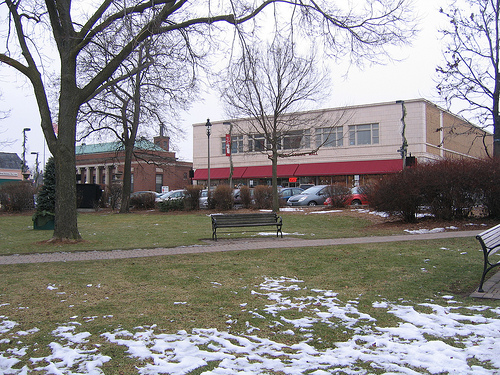 We had lunch at the Tip Top Bistro. The food was delicious.

From a recent review in the Chicago Tribune:

The restaurant used in the 1993 movie was called the Tip Top Cafe, but the movie’s fictional “Cafe” was actually an empty storefront used for the film’s restaurant scenes. The spot on the square has continued to change its identity over the years, and the new Tip Top Bistro has been open for about six months. 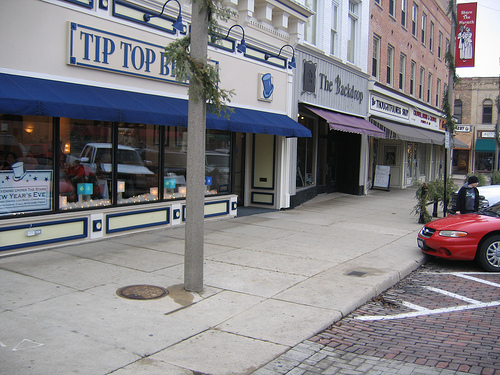 In front of the Tip Top Bistro is a small plaque on the ground where Bill Murray (as Phil Connors) stepped into the puddle. 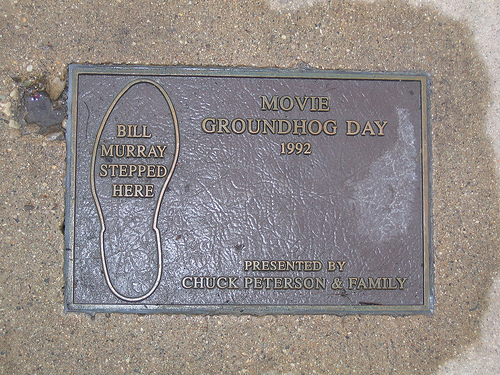 Unfortunately the Chamber of Commerce was closed. We could see lots of Groundhog Day souvenirs inside through the window.

The beautiful Opera House on the south side of Square Park was Pennsylvania Hotel where Andie MacDowell (as Rita) was staying: 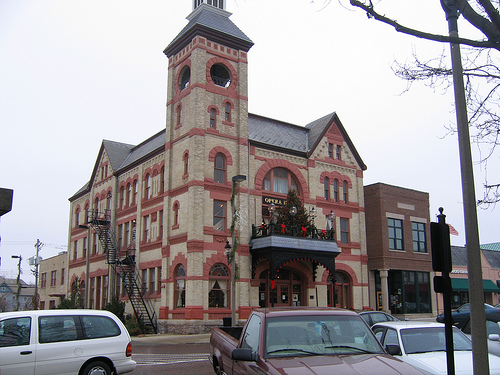 On our way out we drove by the Cherry Street Inn, which is the bed and breakfast where Bill Murray was staying. This is actually a private residence: 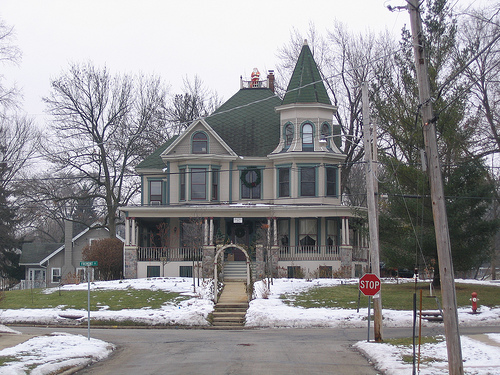 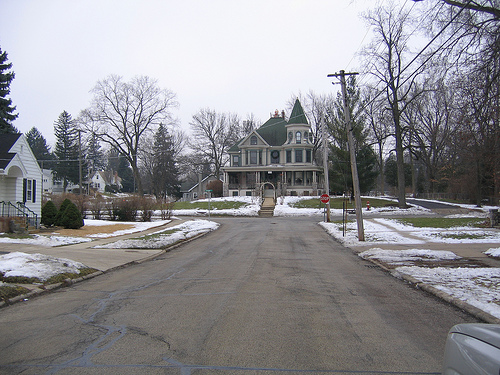 This entry was posted on Friday, December 30th, 2005 at 10:57 pm CET and is filed under Illinois, Pop culture, Travel with tags . You can follow any responses to this entry through the RSS 2.0 feed. You can leave a response, or trackback from your own site.

I spent most weekends for about three years in Woodstock, IL. Love the Opera House and town square. The Woodstock Jewelers is visible in the background in the movie behind Ned’s first entrance.

My friends live in Woodstock next to the town square. Bill Murry while filming was going to stay at my grandmother’s house in Marengo, but she said no. Also the lady I work with is Bill Murry’s 2nd cousin. Small world huh?

i live on the same street as that of bill murray’s home in the movie. i have childhood memories of watching the movie being filmed from my front porch. who would have thought it would become so famous?

AFTER LIVING MY ENTIRE LIFE IN WOODSTOCK I REALLY WHISH HOLLYWOOD WOULD FILM ANOTHER MOVIE THERE SO THAT PEOPLE COULD GET OVER THIS WHOLE GROUNDHOG’S DAY THING.

I just finished watching the film ‘GROUNDHOG DAY’ on TV (even though we own a video). All the family walked through the room as the movie progressed; they would pause, laugh or say a few lines in unison with the characters. WE LOVE THIS PICTURE! This is no longer a mere film, it is a ‘Classic’ and has become endeared to all generations.
This little community ought to host a week-long series of events. Have all kinds of activities to compliment the scenes and characters in the film. It would be a boost to the local economy and make GROUNDHOGS DAY special all over again!

I loved that movie and I wish I visit this town some day. Greetings from Buenos Aires, Argentina.

I love this movie!!!!!! thanks for the pictures and the information.

@ Aaudrey… Atually, they DO have a weeklong celebration of all things Groudhog’s day. In February, when it’s cold and there’s nothing else to do.

I grew up in Woodstock. While it looks very idyllic, it was really rather boring, as there is nothing for kids to do. I frequently hopped a train into the city to see the museums, music, sports, etc.

Today I I’m watching this movie like every feb 2nd

I grew up in Woodstock in the 40’s and 50’s. Schooled from K-12. When I start to watch the re-runs of GROUNDHOG DAY, my wife always says, “Oh, no, not again.” But for me, and at my age of 75, I relish the stimulation that the movie gives me to call back memories of Woodstock……..the square, the stores, the judge’s house where Bill Murray stayed, etc. As a kid, we know every street and alley in town. Our “Square” was a one-way traffic rule that went counter-clockwise around the square. As a high schooler, with little else to do late at night, we would attempt to set a new world’s record for driving around the square in the wrong direction…when the police were not looking, that is. No one was ever put in danger, but it gave us something to do. My barber was Carmen Stompanato. Carmen’s brother, Johnny, was killed in California by his girlfriend’s (Lana Turner) daughter. The funeral held in Woodstock was a beg deal, because Johnny was a uderling of the west coast Mafia Don who came to Woodstock for the funeral. My former father in law, a rather conservative local banker, happened to end up sitting a couple of chairs from the Don. Our Chief of Police, Tiny Hansmann (who was NOT tiny) partnered with the creator of Dick Tracy, Chester Gould, a Woodstock resident, to create the Crimestoppers Club in Woodstock(re: Crimestoppers Textbook in upper right of the comic strip). I was a charter member. So, when I watch GROUNDHOG DAY, I see much more than just what is on the screen. I see the joy and comfort of growing up in the 40’s and 50’s when no one locked their house door, left their keys in the car, and the kids walked for blocks to school…unsupervised. When you get old, you have more memories than dreams for the future.