There’s a flu-shot shortage in the U.S. and here in Holland people have to jump through hoops if they want one. But a zoo in Rotterdam is doing something to protect a group even more at risk. Rotterdam Zoo “Blijdorp” has become the first zoo in Europe to vaccinate resident birds against bird flu. Penguins, flamingos and even the ducks in the ponds have been injected as prevention against the virus.

The vaccinations were given as a preventative measure before the migration season in spring 2006. There is a chance that migratory birds from Africa will bring the virus with them when they start returning to the Netherlands as early as February. With this immunization the zookeepers hope that their in-house birds will build up a resistance to the virus.

The vaccinations have two parts. The first shots were administered on Tuesday and a follow up shot will be given in six weeks. After that the birds should be flu-resistant for a year.

The veterinarians had difficulty injecting the ostriches. They were so strong that it took four persons to hold the birds down in order to administer the shot. 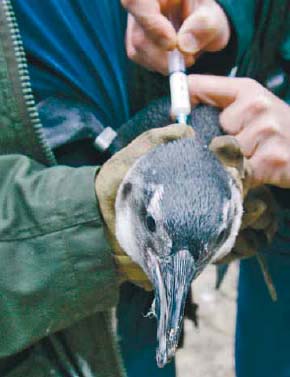 This entry was posted on Tuesday, December 13th, 2005 at 10:30 pm CET and is filed under Birds, Nature, News with tags . You can follow any responses to this entry through the RSS 2.0 feed. You can leave a response, or trackback from your own site.