Home » Life in Holland, Nature, News » Bats in the Netherlands

Bats in the Netherlands

I think bats are very cool. But I don’t think I’ve ever seen one here since I moved to Holland seven years ago. According to vleermuis.net (“the network for information about bats in the Netherlands”), 21 different bat species have been seen in the Netherlands. Of these, 7 species are commonly found. All 21 are protected species here, and 9 of the 21 are on the Dutch “Red List” for threatened mammals.

Of course bats are found all over Europe. EUROBATS notes no fewer than 8 bat-related events happening in Europe in 2006, including the National Bat Conference in Reading UK in September. There is even a museum in Bourges, France devoted to the flying mammals.

In the Netherlands there are at least 12 places where bats are known to spend the winter months, including Fort Kijkuit and Hinderdam, both in Noord Holland.

In spring 2005 volunteers built a new “bat hotel” in the Waterloopboos natural area in Flevoland. This month, three residents, brown long-eared bats, were discovered making a winter home for themselves in the hotel. This is quite exciting for bat-fans, as it usually takes years before bats will take up a new location. 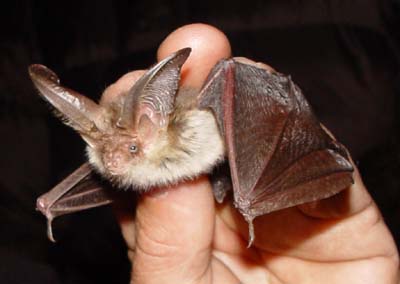 This is all very interesting, but I’ve still never seen one here. So I’ve added something to my ever-growing to-do list: see a bat in Holland in 2006. Wish me luck!

This entry was posted on Monday, January 23rd, 2006 at 7:15 pm CET and is filed under Life in Holland, Nature, News with tags . You can follow any responses to this entry through the RSS 2.0 feed. You can leave a response, or trackback from your own site.

I am in Netehrlands for 2 month and I have seen some.

I have bats in my garden, and I hope very soon that someone will help me identify the breed. I have heard the and seen them. They make a lovely sound.

there are bats in the noerthern part of hte netherlands in a church. hte town in schingen.

There are little black bats over the summer period in Zeeburg in Amsterdam. I’ve seen them before, & saw 2-3 tonight. What do they eat? I have no idea about bats, or their dining habits!

I found a tiny 2inch long bat in my garden and was trying to take care of it. To my surprise it almost fits the description of a very rare endangered Bechstein bat found only in the Netherlands. I’m not 100% sure. Where can I get expert advice in Identifying it? And how can I get it to start eating? It only drinks They’re insect eating bats. There are no fruit bats in NL?

Hi Ray, you can try these bat resources to answer your questions:

What to do if you found a bat [Bat World]

What to do if you find a bat [Bat Conservation Ireland]