This week the new Mount Everest – Legend of the Forbidden Mountain at Disney’s Animal Kingdom in Florida pre-opens for cast members. Disney also launched a new website for the attraction: www.disneyeverest.com.

The new official website has a promotional video, short making of video and photos of the design and construction. The site writes:

Disney’s Animal Kingdom Theme Park is the site of a thrilling new adventure: Expedition Everest – Legend of the Forbidden Mountain opening in early 2006. […] Adventurers who dare, will trek into a remote Himalayan village and explore local artifacts that tell tales of the feared and revered Yeti, protector of the mountain. Board a rickety train bound for an Everest base camp by way of the Forbidden Mountain. Your action-packed journey is thrwarted by the presence of the massive and snarling beast who isn’t happy invaders have tread upon his sacred lands. Take on harrowing hairpin turns up and down icy slopes as you evade the wrath of the Yeti. Just as you find yourself about to plunge off the edge of the mountain, your train slowly teeters toward the edge, before moving — backwards! It’s a one-of-a-kind experience that only the boldest explorers will take on.”

Special Previews for Expedition Everest for all Florida-site Cast Members, Crew Members and Imagineers and their families and friends (up to the number indicated on their Main Gate Pass) will take place Friday, January 20, through Monday, January 23, during regular park hours (9 a.m. – 5 p.m.). 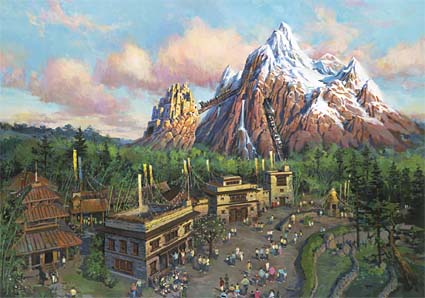 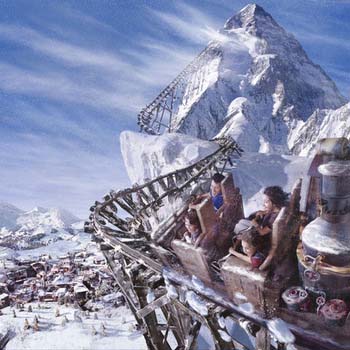 This entry was posted on Wednesday, January 18th, 2006 at 9:38 am CET and is filed under Disney, Pop culture with tags . You can follow any responses to this entry through the RSS 2.0 feed. You can leave a response, or trackback from your own site.

This looks really awesome along with all of the other attractions that are new.

I am planning a five (5) day getaway to go to Disney and I must say that a vacation is desprately needed.

wow!!! i am going there tomorrow with my family for my b-day………………………..me and my brother are really dieing to ride. it look so exciting