Today we had a drive around the Chicagoland area and had two interesting stops: we saw the spindle of cars in Berwyn, and toured the Eli’s Cheesecake World factory.

Made famous in the 1992 film Wayne’s World is this 40 foot spindle of eight cars at Cermak Plaza Mall in Berwyn, Illinois.

The Spindle is an 1989 work of art by Dustin Shuler, who has more auto works in the de Saisset Museum in Santa Clara, California. There are 20 other sculptures located around the mall.

The state of Illinois has an Off-beat Illinois campaign right now that features a poster for the Car-kabob in Berwyn (see image on right). 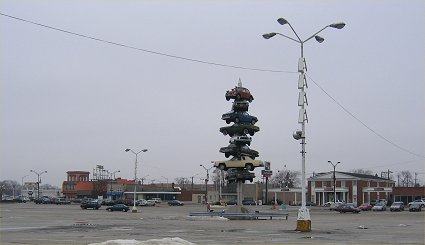 We also stopped at Eli’s Cheesecake World for the 1pm Sneak Peek Tour of the famous Eli’s Cheesecake factory. We had a 45-minute tour that started with a slideshow of the history of Eli’s. Then we had to put on hair-nets (they took a picture of the group for their blog) and we were guided through the factory and saw: (1) the research and development area, where they experiment with new cheesecake flavors, (2) the huge tunnel oven where hundreds of cheesecakes were slowly moving on a conveyer belt, (3) the two-story high cooling tower that can cool thousands of cheesecakes at a time, and (4) the decorating area.

The factory runs 24/7 (the crusts are made in the night and the cakes during the day) and can produce 25,000 cheesecakes per day during their high season between Thanksgiving and Christmas. This is the only Eli’s factory in the world, so all their cakes are made here. It was a fun tour.

We were not allowed to take pictures inside the factory, but you can find some photos in the virtual tour of the official website. 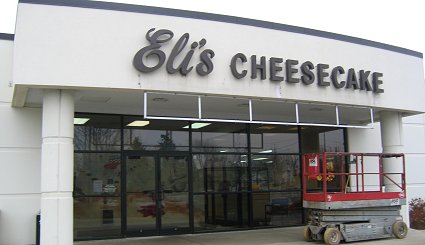 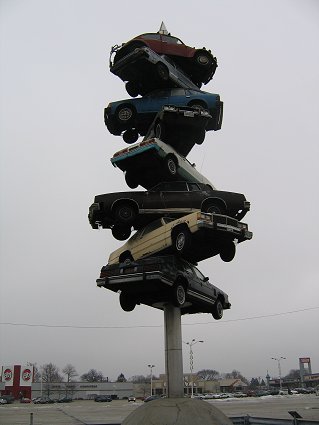 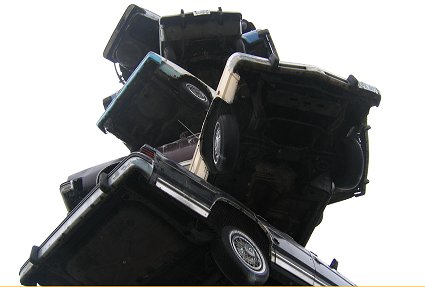 Note: On Google Local you can see the shadow of the spindle on the parking lot of the mall.

This entry was posted on Wednesday, January 4th, 2006 at 1:02 am CET and is filed under Chicago, Illinois, Travel with tags . You can follow any responses to this entry through the RSS 2.0 feed. You can leave a response, or trackback from your own site.

Thanks for visiting us today!

If you or any of your readers are interested in the restoration and preservation of the Spindle, please visit us at http://www.savethespindle.com.