Today in Roosendaal was the funeral of my grandmother, Hendrika De Wolf-Bouma, who died early morning Friday 26 January at the age of 82.

Oma de Wolf was born on 24 July, 1923 and grew up in Kuinre in the province Friesland. The Bouma family moved to Rotterdam in 1930 where she wed Gerard de Wolf and had two sons, Ben (my dad) and Harry. They then moved to Roosendaal in 1968.

It was a nice day; we were at the mortuary at 9:00 where the coffin was closed. Then we drove behind the funeral car to the chapel of the rest home Wieckendael, where she had lived since November 2000. There was a short religious service, there were about 75 to 100 people. Then we all drove to the Zegestede cemetery, where she was buried next to my grandfather who died in 1983. In the afternoon a smaller group of about 45 people stayed and had lunch at Wieckendael. 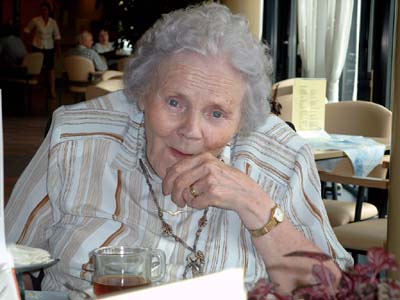 This entry was posted on Wednesday, February 1st, 2006 at 7:59 pm CET and is filed under Personal with tags . You can follow any responses to this entry through the RSS 2.0 feed. You can leave a response, or trackback from your own site.