Home » Top Lists, Travel » Top 10 things to do in Tunisia

Top 10 things to do in Tunisia

In April 2004 we visited Tunisia where we made a road trip through the country’s desserts, salt lakes, rolling hills and beautiful country-side. Here is my top 10 things to do in Tunisia. 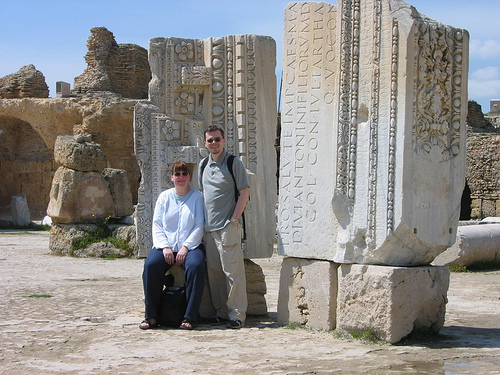 Carthage, on the outskirts of Tunisia’s capital city, was founded in 814 BC and was a Roman metropolis in North Africa. Many of the sites now stand in ruins, but there is still a lot to see in this vast area, including the Roman Amphitheatre, Antonin Baths (once the largest baths built by the Romans) and Roman Village. You can get a great view from Byrsa Hill. Carthage is a World Heritage Site.

The above-ground metro from Tunis to Sidi Bou Said has several stops in the Carthage area, but if you rely on public transport you will still need to do a lot of walking to get from site to site. 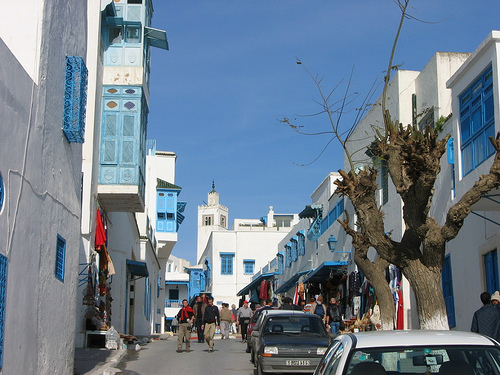 Sidi Bou Said is a picturesque blue-and-white-painted artist’s town on a cliff overlooking the bay of Tunis. Follow the cobblestone street upward into town and get great views of the blue sea and marina. There are many small streets to wander around, and great places to sit and have a mint tea among a clowder of cats.

You can reach Sidi Bou Said with a long metro/train ride from Tunis (beware the rush-hour crowds on weekdays). 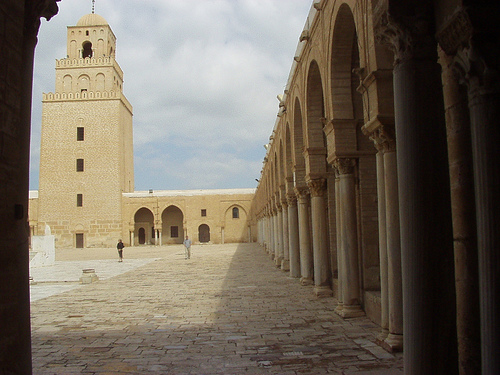 Kairouan, ‘the city of 50 mosques’, is located about 160 kilometers south of Tunis and can be easily reached by car (one hour from Sousse). It is the spiritual home of all Tunisians as the fourth holiest city of Islam (after Mecca, Medina and Jerusalem). The towering Great Mosque dates from the 9th century. Fans of Indiana Jones will recognize the streets as those of Cairo in Raiders of the Last Ark. The old city is a World Heritage Site. 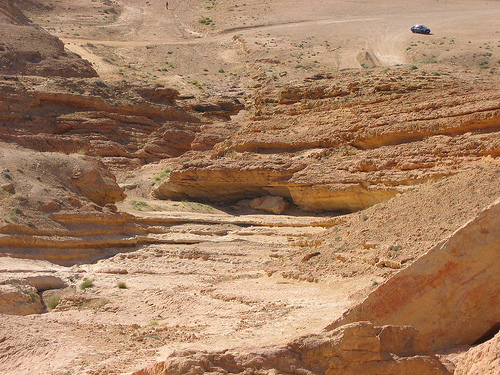 Tunisia is home to movie locations of some of the highest grossing films of all time; Star Wars: A New Hope, Raiders of the Lost Ark, The English Patient and Star Wars: The Phantom Menace. There are some great websites, for instance this one, that can tell you where exactly the movie locations are. Some are hard to get to, so it’s best if you have a car. On this photo on the right we visited the canyon where R2D2 got abducted in Star Wars: A New Hope. 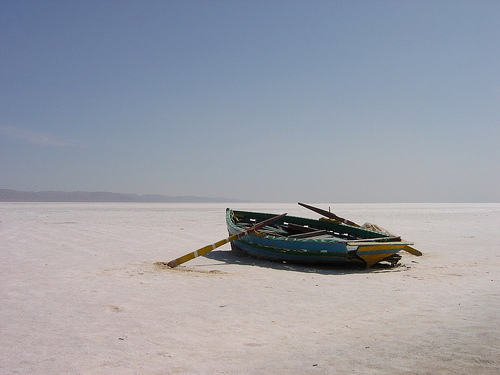 A chott is a lake that stays dry through the hot seasons, but which has some water in the winter. Chott El Jerid is the largest in Tunisia and covers 5,000 square kilometers and lies in the middle of Tunisia, close to the Algerian border. The surface is composed of myriad salt crystals which have formed a thick layer resting on a layer of mud. It is a great experience to drive the 65 km paved road from Tozeur to Kebili that runs through the salt lake. The white expanse on either side of the road goes on forever. There are some small refreshment stops along the road; most of them have strange salt sculptures to attract attention. 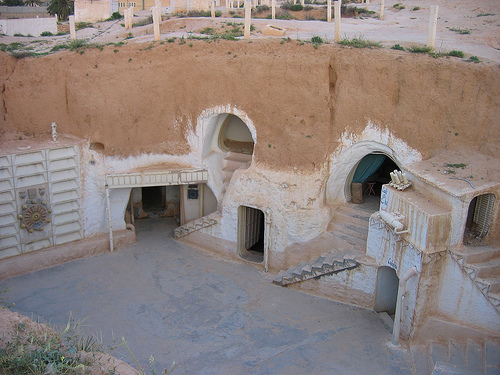 You’ll never forget staying at one of the cave rooms at this great hotel in Matmata, which consists of a series of connected underground caves, dug out of the sandstone, just like many of the troglodyte homes through this area. The simple cave rooms (they are painted white inside, and only have beds and some hooks on the walls) are located around open underground courtyards. One of these courtyars was used as Luke Skywalker’s home on the desert planet of ‘Tatooine’ in Star Wars: A New Hope. When you have dinner at this hotel you’ll find yourself sitting inside this courtyard under the stars in between all the futuristic Star Wars equipment. Contact details: 6070 Matmata Ancienne, + 216 5 230 005. 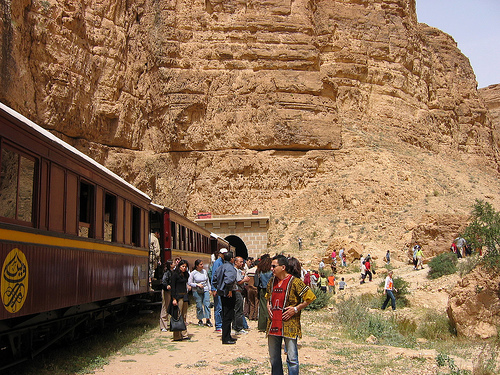 Le Lezard Rouge is an old beyical tourist train that leaves Metlaoui and follows an old mining track along a small river of the Wadi Selja. The mountains rise up high just beside the track. The train stops once inside the gorge to allow passengers to get out and take pictures. Metlaoui is located some 40 km from Tozeur. The train runs from 1 May to 30 September, daily except Mondays, departing Metlaoui at 11:00, arriving at Gorges de Selja 11:40, departing Gorges de Selja 12:00 arriving Metlaaoui 12:45. The fare is 9.50 dinar. You can get your tickets from the small travel agency on the platform (on the left side of the station). 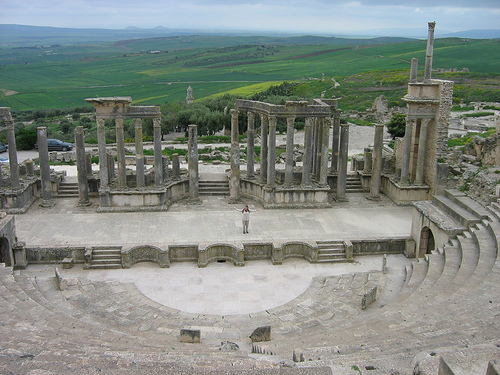 Dougga, a World Heritage Site, is situated 110 km south-west of Tunis in the mountains inland of Tunisia in an area that was densely populated by the Numidians. The 3 km2 site of Dougga offers some nice ruins, but as is the case for many archaeological grounds in Tunisia, the finest statues and mosaics have been transferred to the Bardo Museum in Tunis. Among the most important ruins are the Capital and the Theatre (pictured here).

Nearby is another archeological site, Bulla Regia, which features distinct underground dwellings that the Romans used during the hot summer months. The ancient homes here still contain many mosaics in their original place, which is far more impressive than finding them in the Bardo Museum in Tunis. 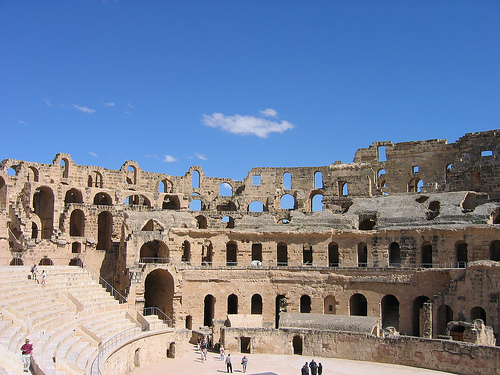 The amphitheater of El Djem, the largest in North Africa, and another World Heritage Site, towers everything around it and you can see it from miles away when you approach the small village.

The theatre, that was capable of seating 35,000 spectators, was built around 238 and was one of the largest Colosseums ever built. 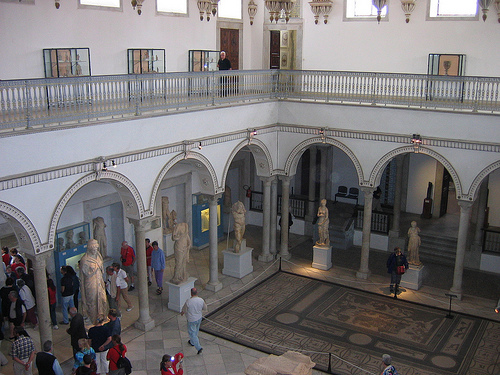 The Bardo Museum in Tunisia’s capital, Tunis, has a collection of Roman mosaics that is considered to be one of the best in the world. In this huge museum you will find statues from Punic times, church mosaics, mosaics from Bulla Regia, Carthage, Dougga, El Jem and other places throughout Tunisia. It is great to visit this museum at the end of your trip; having been to all these places gives you an idea of where to place the different mosaics that are on display in the museum.

The Bardo is located in a suburb of Tunis. It is open every day except Monday, and regular opening hours are 9:30 to 16:30.

This entry was posted on Thursday, February 2nd, 2006 at 3:40 pm CET and is filed under Top Lists, Travel with tags . You can follow any responses to this entry through the RSS 2.0 feed. You can leave a response, or trackback from your own site.

wahoo, I am living here…. I’ve been here for 3 months and I cant get over that I am really here. Everyday is a new adventure. Thanks for publishing this it give me some more things to see.

I got a 3 out of 10… meaning I visited 3 out of 10 in 2004. I plan to go back, to do the other 7, lol. But seriously I miss my inlaws incredibly, and Tunisia itsself. Its really beautiful and a lot cleaner than other countries I’ve been to.
Angela, are you married to a Tunisian too? If you are, please consider joining this yahoogroup for Wives of Tunisians, at: groups.yahoo.com/goup/wivesoftunisians. I know a lot of the ladies in that group would love to hear your insight about Tunisia, as most have not been but hope to go one day.
Thanks,
-Safiyah

I’ve been in these places , they are splendide but try Ain-draham – tabarka

it’s the europeen side of tunisia , the french style of buildings and houses .

I leave close to dougga in a a small city called Teboursouk , very familiar with roman sites and i like archelogy .

Dear Arthur,
I just created a social Network for those who visited or are planning to visit.
Your page offers good information.
Join the network and please post some of your comments and pictures.
Nice to meet you

Flying there in 2 weeks so some useful ideas of things we can do while we are there.

I love this list, plus your comments and especially the photos. And I have created a link to your post, many thanks
Hels
http://melbourneblogger.blogspot.com/2010/08/sidi-bou-said-tunisia-colour-light-and.html

We are staying in Sousse in September for 7 days, for sure will not have time to do everything but like the idea of visiting Tozeur (how far is it from where we are) and think now will try and fit in the
Roman ruins at Carthage. thanks for the valueable information as been struggling to find much to do in Tunisia on web.

@Ken: It is 4.5 to 5 hours from Sousse to Tozeur according to Google Maps: http://bit.ly/r5X1Yi Enjoy your stay in Tunisia!

hi kindly send me a taxi driver number and name to get me to all of thoes places, thanx