When Hong Kong Disneyland was filled to capacity by 11:30am today, an angry mob of parents tried to force their way into the park after the gates were closed. Furious crowds pushed and grabbed on to fences. Some lifted their children over the fences into the park and others climbed over themselves.

The latest Disneyland, which opened in September 2005, was sold out for the eighth day in a row today due to Lunar New Year holidays. The visitors had bought flexible tickets that were valid for six months, but they don’t guarantee entrance when the park has reached capacity. One man yelled “We have tickets!” and another woman shouted “We were cheated!”.

The Hong Kong government, which owns 57% of the resort, reacted “We have reflected these concerns to the senior management of the theme park and requested them to make improvements.”

The park eventually reopened its gates shortly after noon to please the crowds and the spokeswoman said: “I’d like to extend out apologies to those who could not enter the park. We thank them for their warm support. We’ve opened only four months and we’re still learning from our experience.” 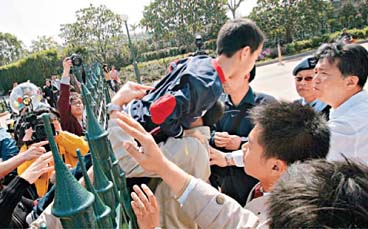 This entry was posted on Thursday, February 2nd, 2006 at 11:04 pm CET and is filed under Disney, News, Pop culture with tags . You can follow any responses to this entry through the RSS 2.0 feed. You can leave a response, or trackback from your own site.