Oh no! It’s officially over for my favorite TV comedy; Arrested Development will not be picked up by Showtime next season, as rumors circulating for months had suggested.

So what will happen with the Bluths and associates? 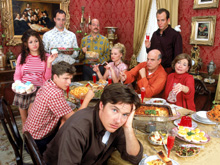 David Cross (Tobias Fünke) is making cameo appearances as Russ Lieber on The Colbert Report, and will voice a cat in the CGI flick Cat Tale.

Will Arnett (my favorite ‘illusionist’ George “Gob” Bluth II), currently starring in the hit Ice Age: The Meltdown, has many movies lined up (Let’s Go to Prison, Blades of Glory) and is set to play the title role along with Will Forte in The Brothers Solomon.

Tony Hale (Byron ‘Buster’ Bluth) recently became a father and is currently starring in Larry the Cable Guy, which just came out a few weeks ago in the US but is so badly received, it is already #16 in the bottom 100 at IMDB. He is also to star along Will Arnett in R.V. and in Stranger than Fiction along Will Ferrell.

This entry was posted on Monday, April 3rd, 2006 at 9:37 pm CET and is filed under Pop culture, Television with tags . You can follow any responses to this entry through the RSS 2.0 feed. You can leave a response, or trackback from your own site.