A new National Park was opened in the Netherlands today; De Alde Feanen lies in the heart of the province of Friesland. It has been a nature reserve for many years; with today’s ceremony it became the 20th National Park in the country.

The area came about as a result of turf-cutting between the 17th and 19th centuries. One hundred different species of water, marsh and meadow birds feel at home in this large fenland, which consists of large pools, lakes, former turf ponds and reed vegetation. Huge numbers of birds arrive at the park every year, either on their migratory route or to spend the winter, hence De Alde Feanen is considered one of the most important bird nature reserves in the country. 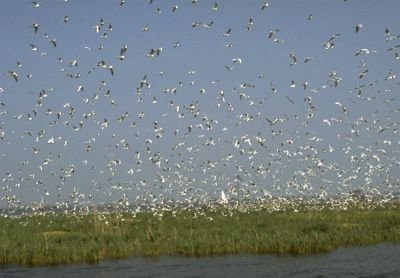 A good way to see birds is with a boat tour through the park, but there are also bird hides available where you can see water birds like Black-tailed Godwits, and with a little bit of luck Spoonbills.

Common birds, like coots and grebes breed here in large numbers, but also less common species, such as Bearded Reedlings, Marsh Harrier and Water Rail, which are harder to spot.

Although plans are being developed to build a new visitors center for the new National Park, visitors can still visit De Reidplum visitors center, which is housed in an old farm building: 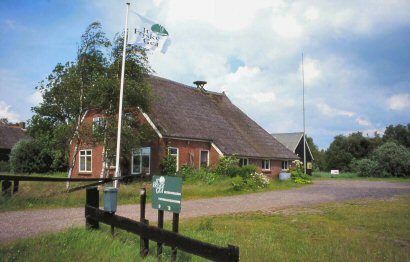 Near De Reidplum is the It Eibertshiem area, where seven Stork pairs breed. A camera has been placed near one of the nests, and the images can be viewed on a television inside the visitors center.

For more information check out the official website (in Dutch only). The opening times and address of the visitor center you can find on this page.

The photos on this page are

This entry was posted on Wednesday, April 26th, 2006 at 6:25 pm CET and is filed under Life in Holland, Nature with tags . You can follow any responses to this entry through the RSS 2.0 feed. You can leave a response, or trackback from your own site.