This weekend was Museumweekend in the Netherlands, when many museums offer free or reduced-price entry. Yesterday we were in Amsterdam, and visited the Tropenmuseum, Verzetsmuseum and Allard Pierson Museum.

The Tropenmuseum is a very nice anthropological museum. Especially interesting for us, as we had just been to India, was the temporary exhibit Dealing with the Gods about rituals in Hindu religion, which runs till 10 September 2006 in the main hall. The exhibit shows how Hindus live with their gods, at important moments in life, like birth, marriage and death, but also in everyday life. We spent most of our visit looking at the great displays of this Indian exhibit, and then we had a quick look at the first floor, which holds many artifacts of Dutch colonial history.

Here is a picture of Amy just north of the Tropenmuseum, as we begin our walk past Artis, Amsterdam’s zoo, toward the Verzetsmuseum: 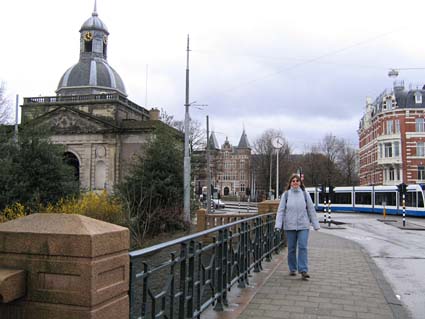 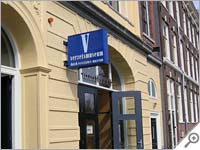 The great Verzetsmuseum, Dutch Resistance Museum, follows the development of the Dutch Resistance movement from the German invasion in May 1940 to the liberation in May 1945. The exhibition shows how the Dutch people courageously faced the occupation, and it includes fascinating displays with private stories of individual heroism, and memorabilia, such as forged identity papers, old photographs, underground newspapers and weapons.

Here is a photo taken near Rembrandt Corner, a small cafe where we had a short break. It was freezing outside and we were in need of some hot chocolate. 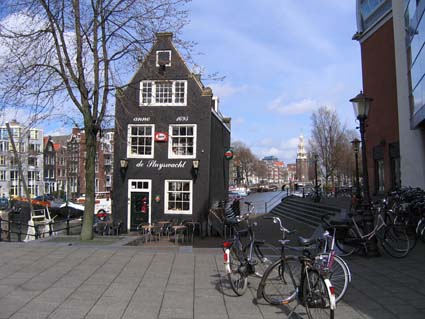 This wonderful smallish museum was named after the University of Amsterdam’s first Professor of Classical Archeology, and contains its archeological collection, including Egyptian mummies, Coptic clothes, Cypriot jewellery, Greek pottery, Roman statuary, and more. We had a short visit here of about two hours, but managed to see most of the displays.

Here is a picture of a photo in the Egyptian section of the Allard Pierson Museum of a fallen statue of Ramses II near Memphis. We had seen this statue on our April 2003 visit of Egypt, but now there is a large building around the statue (see photo 5 in our photo album of that trip): 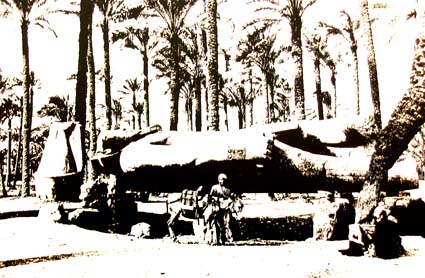 This entry was posted on Sunday, April 9th, 2006 at 4:17 pm CET and is filed under Life in Holland, Museums, Travel with tags . You can follow any responses to this entry through the RSS 2.0 feed. You can leave a response, or trackback from your own site.