Excursion at Zwanenwater with Natuurmonumenten

Today we had an excursion with Natuurmonumenten at Zwanenwater, an area of dunes along the coast with two large lakes. Normally, visitors are only allowed to go to the first of two lakes, but with two rangers we had a 5-hour / 20 km walk around the second lake, through the dunes, marshes, woodland and heathland. We saw many birds including eight Spoonbill.

Zwanenwater reserve is a dune area of 586 hectare in the province Noord Holland and was formed in 1793 when a dike was built connecting two Wadden Islands, Oghe and Huisduinen. The area consists of two dunerows with a valley in between, along with the two shallow lakes. Since 1973 the Zwanenwater has been owned and managed by Natuurmonumenten, or The Society for the Preservation of Nature Reserves in the Netherlands. 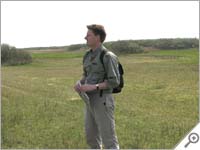 Our walk, with about 20 other people, started at 10:20 at the entrance of Zwanenwater. The rangers who guided us were Sander (see photo right) and Loran from Natuurmonumenten.

The first part of the walk led us off the path over some rugged terrain through the dunes. We walked over heathland, climbed steep hills, and crawled under barbed wire fences. Sander showed us where an illegal campfire had caused a huge fire last year. In the air we saw some Marsh Harrier (Bruine Kiekendief) and Kestrel (Torenvalk). 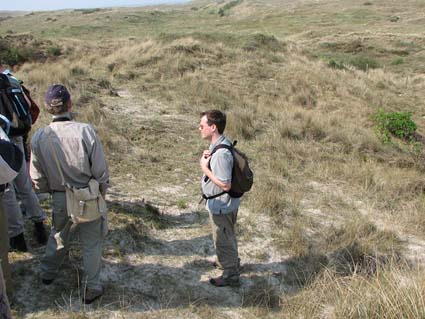 Arthur listens to the ranger

The second part of the walk followed the path around the second lake of Zwanenwater (Tweede Water). We saw a small green frog, and Sander pointed out many flowers and taught us lots of neat stuff. On the west-side of the lake we picnicked on the grass with a wonderful view of a small island where hundreds of birds were breeding, including four pair of Eurasian Spoonbill. In Western Europe Spoonbill only breed in Spain and the Netherlands. A few decades ago there were 300 pair of Spoonbill at Zwanenwater, but the Cormorants have taken over the place, and the island that we saw today was dotted with the black birds and their nests. The Spoonbill have moved to the Wadden Islands.

After the lunch break we had a brisk long walk around the second lake, which covered about eight kilometers without stopping much. Once we were around we walked back to the first lake where we had a look at the water from the bird hide. There wasn’t much to see beside some swans and ducks.

On this last part of the tour there were a few more walks off the normal path, through dunes and heathland, and over an old dike. 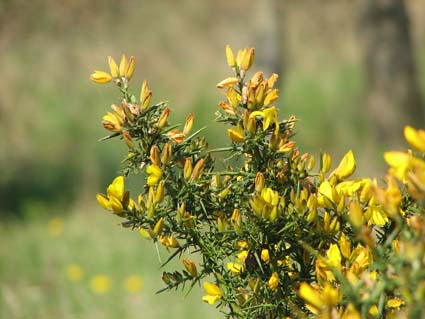 This thorny bush is not native to this area and usually grows in France. In fact, this particular one was brought here centuries ago from seeds carried here in the fur of Napoleon’s horses, who drank at Zwanenwater and were brushed here.

We arrived back at the entrance at 15:50, exactly as scheduled. We had a great walk and thought that the information given by Sander and Loran was very informative. The excursion cost us 8 EURO per person (members price). 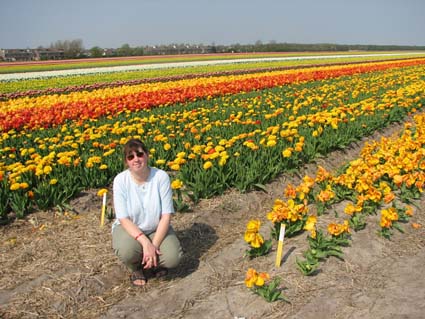 Amy by a flower field across from the entrance of Zwanenwater

This entry was posted on Saturday, May 6th, 2006 at 8:05 pm CET and is filed under Birds, Life in Holland, Nature with tags . You can follow any responses to this entry through the RSS 2.0 feed. You can leave a response, or trackback from your own site.

The rangers of natuurmonumenten and some volunteers have created a weblog (in Dutch) with a lot of inside info about the reserve, nature and managment.
http://bloggers.nl/zwanenwater