Tonight I have been adding travel photos of ourselves to Flickr and ‘geotagging’ them. The result: a great interactive map of the world with dots of where we’ve been. It’s the online equivalent of having a map on the wall with thumbtacks. The Flickr website used to be very slow for us here in the Netherlands, but since last year it has been much faster (maybe because they moved from beta to gamma?). In fact, I can’t believe how fast it is to upload photos with the handy Flickr Uploadr, and I’ve never geotagged photos as easy as I have on Flickr. The maps that Flickr uses are from Yahoo! Maps (Flickr is owned by Yahoo), and that I find a bit of a downside; it’s much slower and the areal photos much less detailed than those of Google Maps. Still, I love this site and I’ll keep putting up our travel photos until you can’t see the map anymore from all the pink dots. 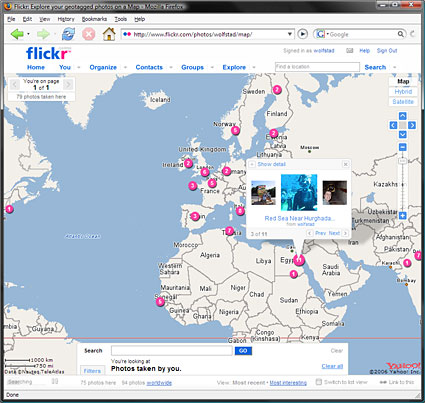 This entry was posted on Thursday, February 8th, 2007 at 8:53 pm CET and is filed under Travel, Websites & Tools with tags flickr, Personal, Photos. You can follow any responses to this entry through the RSS 2.0 feed. You can leave a response, or trackback from your own site.

Speaking about “geotagging”: do you know locr?

For automatic geotagging you need a datalog GPS receiver in additon to your digital camera. The GPS receiver data and the digital camera data is then automatically linked together by the locr software. All information will be written into the EXIF header.

With locr you can upload photos with GPS information in them without any further settings. In the standard view, locr shows the photo itself, plus the place it was taken. If you want to know more about the place where the photo was taken, just have at look at the Wikipedia articles which are also automatically assigned to the picture.

Have a look at http://www.locr.com.