The saga of the Rotterdam ‘parkshuttle’ continues. After nearly eight years of setbacks (including the December 2005 crash), the driverless robot buses — that are supposed to bring commuters from a metro station to an office park on a two-kilometer special road — takes another blow as the company that made the buses has filed for bankruptcy. 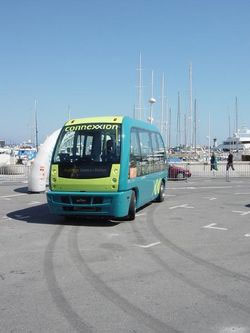 The project has been plagued with problems from the start. The buses started driving in 1999, when already there were many technical problems. Testing was halted for nine months until a limited number of passengers were allowed to use it again. When the official test period ended in June 2000, work started on expansion of the route, which eventually lasted until December 2005, when finally the first buses started going again. Prime Minister Jan Peter Balkenende made the first official trip, which received a lot of media attention, when five days later two buses crashed into eachother. Before the investigation into the crash could be completed, one of the buses burnt out in a garage.

Since that incident it has been rather quiet around the project. Originally the shuttle was supposed to start again in January of this year, but this has been delayed when one of the six vehicles went missing! It is now uncertain if the unmanned ‘peoplemover’ will ever go again, as the designer of the buses, Frog/2getthere, has just filed for bankruptcy.

In the meantime, the city of Rotterdam and transport company Connexxion have invested 6.2 million Euro in the ‘parkshuttle’, not including the costs of testing in the first few years starting in 1999.

Since the bankruptcy was announced a week ago, the city of Rotterdam and Connexxion are talking about the possibilities of continuing the shuttle. “The project is too important to cancel now,” said spokesperson Aart Jan van Kapel.

A decision will be made within two weeks. Connexxion and the city are dependent on Frog/2getthere, as it is the only company in the world that has made this type of system.

This entry was posted on Wednesday, April 18th, 2007 at 9:42 pm CET and is filed under Life in Holland, News, Science & technology with tags Funny, netherlands, News. You can follow any responses to this entry through the RSS 2.0 feed. You can leave a response, or trackback from your own site.