Last Saturday we went to the Arrow Rock Festival in Biddinghuizen. The festival took place at the Walibi World amusement park, in a large field set up for festivals and events. The festival hosted a dozen artists and was headlined by Aerosmith. Here are some short clips of the event: 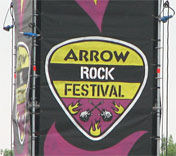 We bought our tickets back in February and the weather might have been nicer then. Actually, with a forecast calling for rain, we were lucky to only suffer a few sprinkles during the cool, overcast day. Since two of the three stages were completely open-air, it could have been a lot worse.

The first performers were Tesla, who took the stage at 1pm. Unfortunately we sat in a traffic jam less than 10 kilometers from the festival entrance until 2pm. We ended up missing both Tesla and INXS, two of the bands I was most interested in seeing. Lots of people stuck in the traffic jam decided to get out and walk, so along the stopped traffic a steady stream of fans trekked towards the music. Twice during the hour plus jam, police escorted touring buses past the traffic in the oncoming traffic lane. We wondered which VIPs or even bands these might have been. 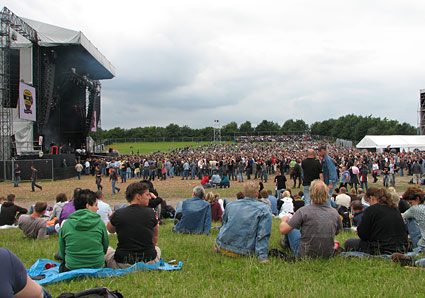 We had decided to take a camp site at the vacation park attached to Walibi World, rather than at the festival camping. We figured we would have better access to facilities and a quieter environment, although it was a twenty-minute walk to the festival from our tent. When we arrived at about 2:15 we decided to set up the tent first rather than sprint to the festival with a slim hope of catching the end of INXS on stage.

We finally arrived at the festival at about 2:45. We walked past Thin Lizzy performing in the tented stage area and found a place on the grass next to the largest stage to watch a bit of Riders on the Storm. 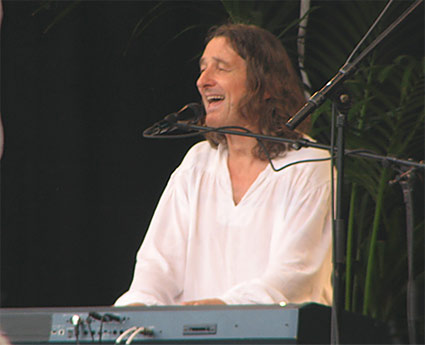 Roger Hodgson, voice of Supertramp, took to the smallest stage area at about 4pm so we wormed our way to the side of the crowd to watch him perform some familiar tunes. He also played some solo stuff and it all sounded pretty good. He also genuinely seemed to be enjoying himself, chatting with the audience and bouncing from keyboard to guitar to piano and back again. 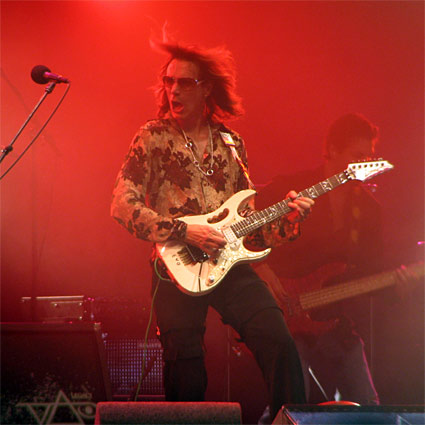 Next we watched a bit of Steve Vai who was performing in the tented area. He sounded great and even sung a bit, which surprised me. He was a very energetic performer with a great band behind him.

After Steve Vai we decided to find a good spot on the grass back by the largest stage area so we could watch the last three bands. We laid our blanket out to the side of the stage where the ground level was sloped so we could easily see beyond the people sitting in front of us.

First the Scorpions came on at 5pm. They sounded okay. I think we saw more Scorpions t-shirts walking around than any other band, so there were a lot of fans there. Next Toto came on at 7pm for an hour and a half set. 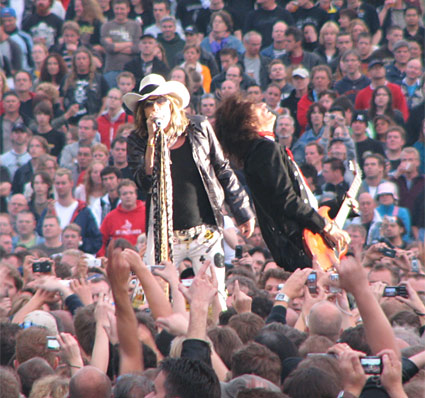 Aerosmith came out right on time at 9:15 for an hour and half show. They started with a great, energetic performance of Love in an Elevator and kept up the excitement for the entire set. They looked and sounded great. Huge screens were set up to each side of the stage and, unlike the previous bands, Aerosmith used these to show the action on stage and in the audience. For the last set Steven Tyler even had a mic-cam which gave everyone an even bigger view of that famous mouth of his. 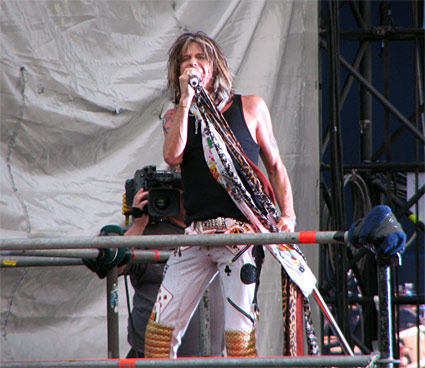 Besides the great music, the festival also had a small market and a lot of food and beverage stalls. The market had vendors selling rock t-shirts, jewelry and CDs. There were also tattoo artists and a mobile piercing station.

The festival was attended by about 25,000 people and I think it’s safe to say a good time was had by all. After the show we shuffled out with the crowd and made our way in the dark to our campsite. We turned in right away but about 30 minutes after we bedded down a few groups of rock fans arrived and continued talking, very loudly, until about 2am. That’s fine for the festival camping but we had really hoped to avoid that in the ‘regular’ camping. Most of the other sites were taken up by families so the loud talking in the middle of the night certainly could not have been appreciated by them either.

Anyway we had a good time and look forward to seeing who will be on the bill next year, when the festival will take place over two days instead of just one. 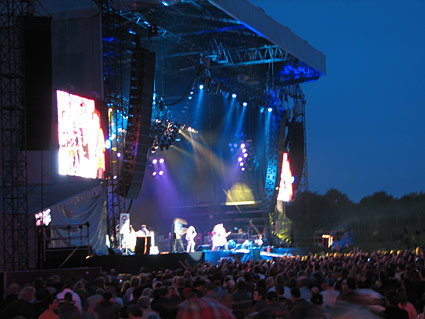 This entry was posted on Monday, July 2nd, 2007 at 6:20 pm CET and is filed under Life in Holland, Pop culture with tags aerosmith, arrow rock festival, biddinghuizen, festival, music, netherlands. You can follow any responses to this entry through the RSS 2.0 feed. You can leave a response, or trackback from your own site.

Hi –
Due to my vacation and subsequent injury I had to miss the whole festival! You guys were in luck, and thanks to your vivid blog/images I finally got to know what I missed out on!
Thanks for sharing!
Inge