Passengers of the Python roller coaster in the Dutch theme park De Efteling were lucky to survive a serious incident yesterday. The double-loop roller coaster (constructed in 1981) had gotten stuck at a high point of the track, with its first few cars hanging over the the incline.

Park employees had gone to the site to free the passengers from the train. They made a HUGE mistake by starting to evacuate the train from the back. During the evacuation, with some passenger’s safety harasses already pointing up to leave their cars, the front of the train became heavier and the train started going again! One of the employees could still jump out of a car and sustained minor injury.

The train made its full journey including two vertical loops and a corkscrew. Two passengers’ still managed to quickly pull down their safety harnesses moments before the train entered its first loop! It was a miracle that no one fell out.

Here’s a video starting just before the trains starts going: 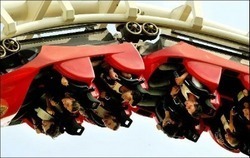 This entry was posted on Wednesday, August 1st, 2007 at 8:25 am CET and is filed under Life in Holland, News with tags efteling, News, roller coaster, theme park. You can follow any responses to this entry through the RSS 2.0 feed. You can leave a response, or trackback from your own site.