Today we had a rare tour of De Meelfabriek (‘The Flour Factory’) in Leiden as part of Open Monumentendag (‘Open Monuments Day’). De Meelfabriek is an old factory near the center of Leiden, not far from our house. You can see it here from a short distance: 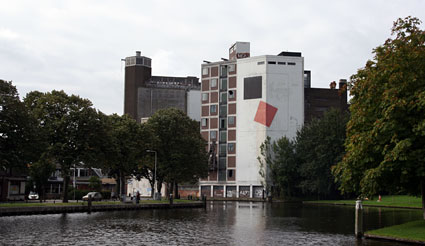 De Meelfabriek was started in 1883 and in its heyday provided the country with 20% of its flour. It is truly a huge complex, with thirteen large buildings and silos up to thirteen stories high. The factory closed in 1988 and has been abandoned since. In 2000, the government declared it a National Monument, but the buildings are in great disarray. I often passed the factory by car and could never believe why for 19 years nothing has been done with this land, which within the historic city center of Leiden must surely be very valuable property. 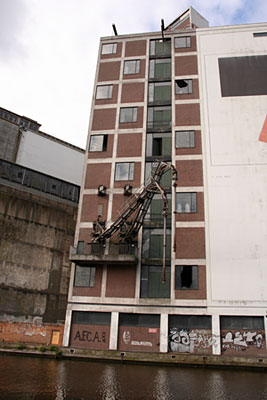 The walls are covered in graffiti, there are many broken windows, and equipment, including forgotten cranes and hoses that were used to pour flour into ships, are still attached to the buildings. The whole scene reminds me very much of the abandoned Rio Tinto mines in Spain we visited in May, or the deserted houses and gold mines we saw on our trip to Colorado.

We arrived at the factory at 11:00 and were greeted by large signs telling us that accessing the factory is on your own risk, you can only go in with a guide, you must be in very good health and not afraid of heights, etc. We waited for about 10 minutes while watching a short video in a large hall where the machines used to be. There were small holes in the ceiling leading into the silos. The guide told us to look through them and you could ten stories up. I wondered if there were any bats living inside.

The room was very dark and messy, with lots of machine parts laying all over the place and pipes and conveyor belts along the ceiling. There were also some dead pigeons, some eaten. The one building we were in for our tour was completely made of concrete, and the room on the ground floor had many thick concrete columns. The guide explained that this building was one of the first buildings made of re-enforced concrete in the world, and because knowledge of how much weight it could bear was so limited at the time, they actually put in way too many columns, just to be on the safe side. In newer parts you could see that the columns stood farther apart.

The guide took us into the main staircase up ten floors. Every floor we could walk or peek into a room full of abandoned machines and pipes, conveyor belts and other abandoned equipment. He explained that the factory had been regularly refitted for different products, like peanuts and noodles, so every time the pipes had to be changed they drilled new holes in the wooden floors. It was quite bizarre to walk around with all the stuff still laying around, as if the place had been abandoned in a hurry.

The staircase took us to a large terrace with a great view of the city. This was already the end of the tour, but we stayed up here for a while and took some pictures of Leiden. 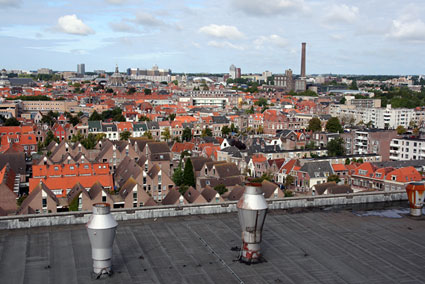 We could clearly see The Hague and Rotterdam in the distance and even make out the Euromast in Rotterdam: 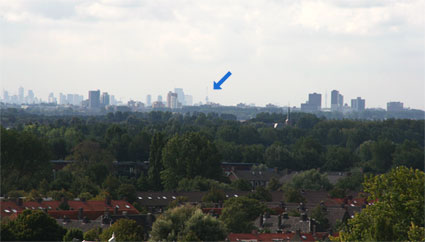 The tour was very nice and it was great to finally see inside this ugly building. A separate exhibition explained about the future of De Meelfabriek. Apparently, the city has had several architects propose plans for revitalising the area, and a 2005 plan by Swiss architect Pete Zumthor was presented with a video and some displays. The plan will change the old factory into student housing, a place for cultural activities, a sky deck restaurant, hotel and sports facilities. The plan is yet to be approved by the city and will surely take many more years to complete.

This entry was posted on Saturday, September 8th, 2007 at 11:25 pm CET and is filed under Leiden with tags architecture, Leiden, monument. You can follow any responses to this entry through the RSS 2.0 feed. You can leave a response, or trackback from your own site.