On Sunday 14 October we had our fourth diving day in the Red Sea (see our photo album of this trip) with Colona Divers and our guide David took us to Yolanda and Shark Reef for our first dive of the day. It took about an hour for our boat to arrive there from the Travco jetty in Sharm El Sheikh. The famous dive site (which is often listed among the top dive sites in the world!) is located at the southernmost tip of the Sinai Peninsula in Ras Mohamed National Park, where the Gulf of Suez and the Gulf of Aqaba flow into the Red Sea: 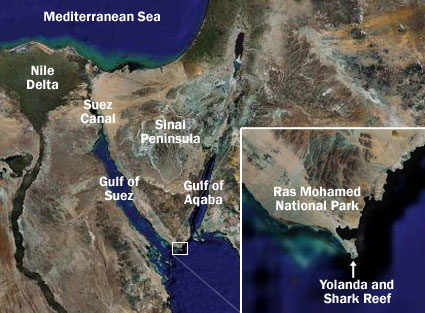 This causes a lot of current, which made it quite a challenging dive for us. We are only (PADI-certified) Open Water Divers, and this was our 27th dive. We have done a few easy-going drift dives, but nothing like this. The current at Yolanda and Shark Reef made this by far our most difficult dive ever. David afterwards called it a washing machine, which was a a fun and apt description.

Our boat moored east of Shark Reef near ‘Anemone City’ and this is where we descended. We didn’t have much time to look around there as we were quickly swept toward Shark Reef.

A shallow saddle lies between the two reefs at 18 to 20m (60 to 65 ft), and this is where the current is strongest coming from the north side. As we swam around Shark Reef toward the saddle Amy and I had a very hard time moving forward. David was ahead of us and stayed closer to the reef and the bottom where the current was less, but the two of us were finning as hard as we could. We were also being pushed up slightly. Later David told us that we should have made ourselves negatively buoyant to stay close to the bottom, as the current not only pushes us back but also upwards. We slowly made it to the saddle, where our guide managed to move between the two reefs. We kept finning like crazy but were not moving much at all. We couldn’t believe how strong the current was. At one point I looked to my left and saw lots of other fish trying to swim in the same direction, vigorously moving their caudal fins, but not moving much either. Of course, if those fish are having a hard time then we don’t stand a chance! 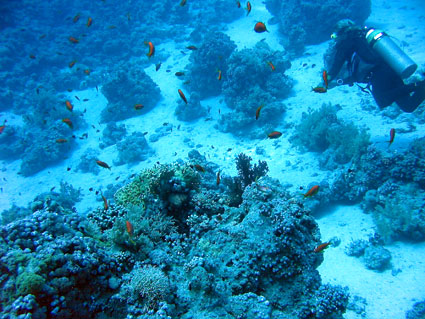 David signaled to us that it was all okay and we should just let it go. So we stopped finning and let the current take us past Yolanda Reef. When we came to a standstill I turned around and noticed how close I was to the reef. It is remarkable how close to the bottom and reef wall David and other good divers are able to swim without touching anything, just one or two inches away from the coral, but I find that a bit too close for comfort. When I turned my head toward the reef, a Lionfish was just a few inches from my mask so I quickly swam backward (they’re poisonous, you know). I had never seen one up so close, which was quite nice.

Yolanda Reef is named after a Cypriot freighter of the same name which ran aground in 1980. It was carrying a large quantity of household toilets of the Ideal Standard brand. The ship has since shifted off the reef and sank into the deep, but a huge piles of toilets is still laying west of the reef. This was a remarkable sight. I swam over one that was completely covered in the most beautiful soft corals .. it was the nicest toilet I had ever seen! I could still read the ‘Ideal Standards’ logo. 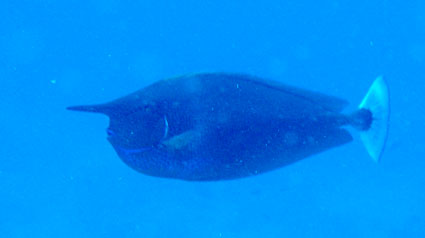 We saw two Unicornfish on this dive

We swam onward to the north side of Yolanda Reef, but this is where the current became strong again. It swept us with remarkable speed around the reef and over the saddle until we came to a stop on the other side. I made a motion of wiping sweat off my forehead and was glad that the dive was almost over. By now we were 50 minutes into our dive and Amy and I had only 50 bar of air left (we are usually quite good with our air, so we are told, but all the extra finning and fighting the current really made us use a lot more air than usual), so we did a safety stop of 3 minutes and ascended to the boat.

Never having done anything like this it was quite a stressful dive, but looking back on it it was probably my most favorite dive ever. The flora and fauna was magnificent, and I’m really proud of us for managing to get through it without freaking out, popping to the surface or touching anything. It is one dive that I will not quickly forget.

We didn’t have much time to take pictures, but you can find some nice ones on Streamreel.co.uk.

This entry was posted on Friday, October 19th, 2007 at 9:14 am CET and is filed under Nature, Scuba Diving, Travel with tags colona divers, egypt, Scuba Diving, sharm el sheikh, Travel. You can follow any responses to this entry through the RSS 2.0 feed. You can leave a response, or trackback from your own site.