Old-fashioned cans with pull tabs, still used around the world after 30 years

I still remember the old-fashioned pull tabs on pop cans that were introduced in March 1963 by the Pittsburgh Brewing Company. You put your finger in the ring and pulled the tab off. Unfortunately, these pull tabs were an environmental disaster; pets and wildlife died from digesting the sharp things, as did a few people who dropped them into a can and then accidentally choked on them. The hazardous tabs wound up on beaches, where people cut their feet on them, and littered roadsides and damaged garbage disposals.

Stay tabs (also called colon tabs) were the solution! They were were invented by Daniel F. Cudzik of Reynolds Metals in Richmond, Virginia in 1975, partly to prevent the injuries caused by removable tabs. These are the lids we know today: the tab that can be leveraged to open the hole by pushing the tab into the can. Stay tabs almost completely replaced pull-tabs by the early 1980s … that is, in the western world.

On our holidays in India and Egypt we’ve seen that pull tabs are still being used!! And not only by some local soda companies … no, they are on cans of Coca Cola, Pepsi, Fanta, Sprite, etc! Why is it that more than three decades after the introduction of the stay tab, there are Coca Cola factories in India and Egypt (and presumably in lots of other countries) that are still using these hazardous things?! Isn’t it about time they update their machines?

Here’s a picture I took last week of an Egyptian Diet Coke can: 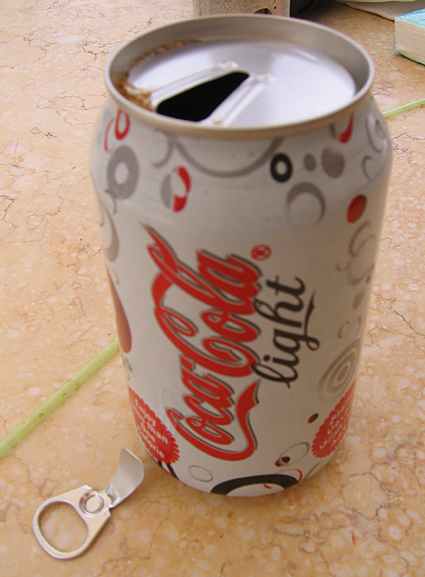 This entry was posted on Thursday, October 18th, 2007 at 8:04 pm CET and is filed under Nature, Shopping & Stuff with tags cans, coca cola, egypt, opinion. You can follow any responses to this entry through the RSS 2.0 feed. You can leave a response, or trackback from your own site.

unbelievable. this, in a nutshell, is why i hate corporate america and the ‘a-moral’ capitalist business mind in general.
Business mind: “pull tabs are a disaster but there’s no laws preventing it there? and it costs $

thanks for posting this!

um… it totally cut off what i said. never mind. hahah.

This isnt something that keeps me awake at night or draw strong feelings toward corporate America. Although it is surprising that foreign divisions have not justified the cost of doing the right thing after 30 years. I guess if enough people complained over there like they do here something would be done.

people should worry more about the poison they are drinking instead of the can.

This posting, “Old-fashioned cans with pull tabs, still used around the world after 30 years

Just got back from Saipan July/2017, dug up an old TAB can that tripped the metal detector. I could barely read the can as its faded and now a dull gray. However, it said Sugar Free vertically three times. Also could see the T and B barely and that it was a Coca-Cola product. Can anyone “date” this can? I know its a TAB can as my mom used to drink it when i was a little boy, i’m 48 now. Thanks, Karl in Tokyo.

I want bags of these. As kids we made things from them. I have had ideas for years of things to make from them. Like a lamp shade, a mock suit of chain mail, bracelets… Mostly for show so I can show them to my nieces, nephews, great nieces and nephews and my son. They never new the fun we had as kids making things from pop-tops.