Home » Pop culture » Worth the wait

This morning we saw Indiana Jones and the Kingdom of the Crystal Skull and it was great! I wouldn’t say it was better than Raiders or Crusade, but it was an Indy film through and through. All the elements that made the first three movies so great were there.

Since we got back I’ve been reading a lot of comments and reviews (on boards and social networking sites) of people who think that the movie is a piece garbage and should never have been made. These purists are complaining about the story being unbelievable, has over the top scenes and there being too much CGI. These people should stop whining and enjoy themselves. This is frickin’ Indiana Jones! It’s supposed to be supernatural, over the top and silly! 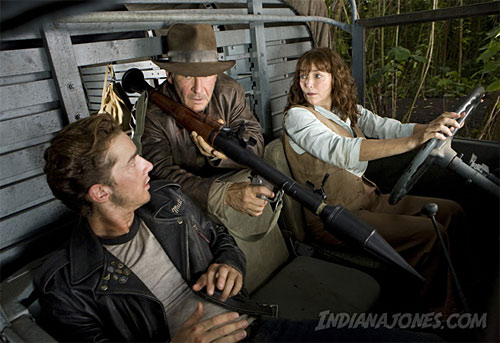 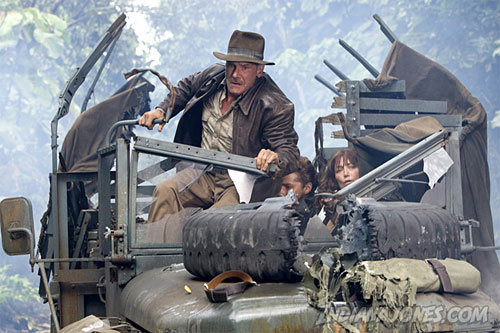 All these complaints about the aliens story (it’s supposedly a cross between The X-Files and Close Encounters), the refrigerator scene and our heroes surviving a triple waterfall are valid arguments … for a REALISTIC movie!! When were the first three movies in the series not exactly like this?

The first movie was about the Ark of the Covenant (an artifact of which there is no scrap of evidence) that was built at the command of God and has the power to make any army invincible. How is that any different from the story in Crystal Skull? I find the existence of interdimensional beings and their influence on an ancient Mayan culture much more convincing than that of the Ark. But then, I’m not a very religious person.

The second movie featured magical stones, voodoo dolls and a man who lives after his heart gets ripped out by a crazy priest. Isn’t that just as absurd as the story of the crystal skulls? And isn’t the mine cart sequence even more outrageous than the Crystal Skull’s waterfalls and jungle chase scenes combined?

The third movie featured a 700-year-old crusader guarding a cup that brings everlasting life, while a fake cup turns a man into dust. Is that just a bit unbelievable as well?

In the first three movies Indiana Jones got shot at hundreds of times, fell off cliffs, fell out of a plane in a rubber boat and hung onto a submarine in pursuit of the Ark. This absurdity is exactly what makes the Indiana Jones series so great. This fourth film will fit perfectly in a boxset with the other three.

And too much CGI? Come on, it wasn’t so bad! These films have been full of the latest special effects since Raiders came out in 1981. In the eighties that meant miniatures and in the 2000s that means CGI. If George Lucas and Steven Spielberg had used miniatures and stop-motion animation for Crystal Skull then everybody would have hated that.

All in all I thought Crystal Skull was good popcorn entertainment. I hope its success will convince Steven Spielberg, George Lucas and Harrison Ford to make many more. I’d love it if they made at least two more with Harrison Ford (they can shoot 5 and 6 at the same time) and after that Shia LaBeouf (who was great) can take over as the leading man. 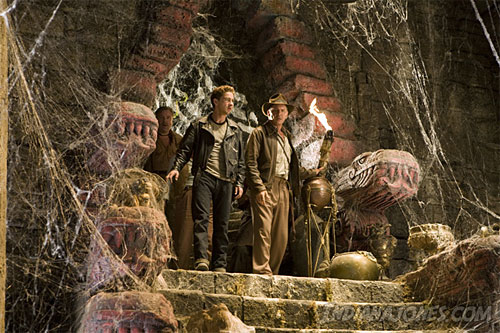 This entry was posted on Friday, May 23rd, 2008 at 9:08 pm CET and is filed under Pop culture with tags indiana jones, Movies, review. You can follow any responses to this entry through the RSS 2.0 feed. You can leave a response, or trackback from your own site.

OMG! My daughter and I went to see Indiana Jones yesterday! I loved, loved, loved it!!!!! I have to say that I rolled my eyes when I found out that the boy from Even Stevens was going to be in it. But DANG!!! Shia LaBeouf’s grown up and I am frickin’ impressed! I just couldn’t make my mind wrap around him being in an adventure movie, but once I saw him in action, I thought he did great.

And of course Harrison Ford is always da bomb! 🙂

I also agree…. I’d love to see more! And now that I’ve gotten over the shock of trying to picture Shia LaBeouf as a leading man and have actually seen the car chase scene through the jungle, I’d love to see the series live on later with him taking the lead.