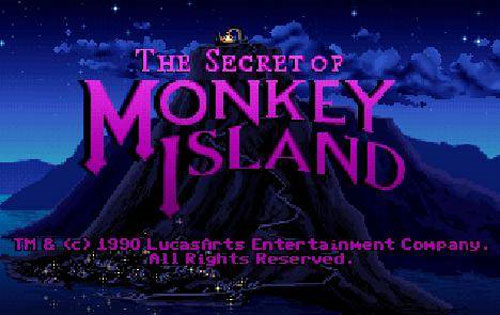 The Secret of Monkey Island came out in 1990 and was the first in the Monkey Island series. The hilarious game stars Guybrush Threepwood who wants to be a pirate, but he quickly learns that he must go through three trials to become one. He meets the lovely Elaine Marley who gets kidnapped by the evil ghost pirate LeChuck. 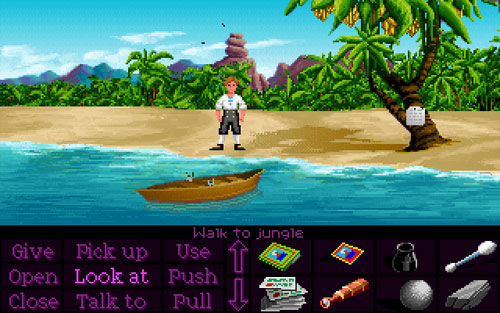 This is one of the funniest games I have ever played. I remember laughing out loud at this silly game every time someone mispronounced Guybrush Threepwood’s name, and all the pirate insults were very clever. 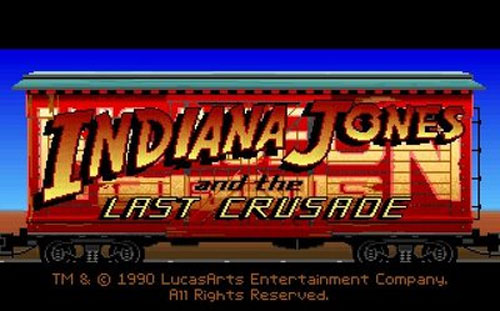 Indiana Jones and the Last Crusade was released by Lucasfilm (now LucasArts) in 1989. I loved playing this game on our Atari ST. The plot of this graphic adventure game follows the film, which was one of my favorite films. 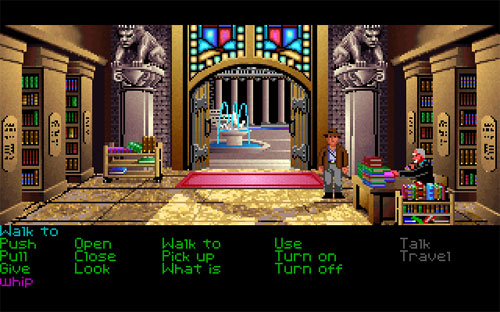 Last Crusade was LucasArt’s most innovative of the LucasArts adventures to date. It included a flexible point system, called the IQ Score (‘Indy Quotient’) that allowed the game to be completed in several different ways. This was similar to the point system used in Sierra On-line’s adventure games and was introduced to make it worthwhile playing the game again. 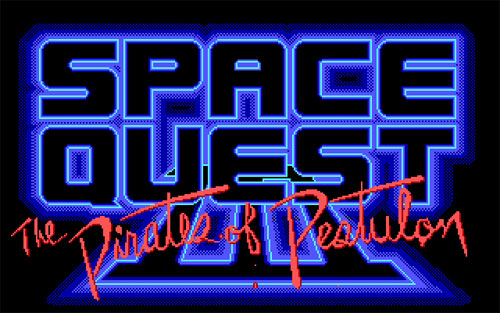 I think that this was the first Space Quest game that I played, and I later played the first two, but I have the fondest memories of this one. The Space Quest series by Sierra On-line follows the wacky adventures of a janitor named Roger Wilco, who campaigns through the galaxy for truth, justice and to clean floors.

Space Quest 3 is a graphical adventure allowing you to move Roger Wilco around with your mouse, but it relies heavily on text input. I wonder if I would have the patience today to go through a game like this, typing in commands like ‘jump’ and ‘push button’. 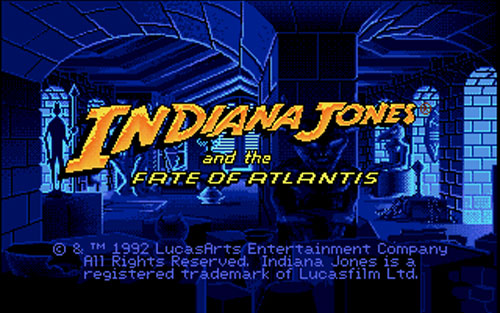 In Fate of Atlantis, which takes place in 1939, Indy travels around the globe together with Sophia to gather clues about the legendary lost continent of Atlantis. It is a great story that would have been perfect for a live-action Indiana Jones movie. 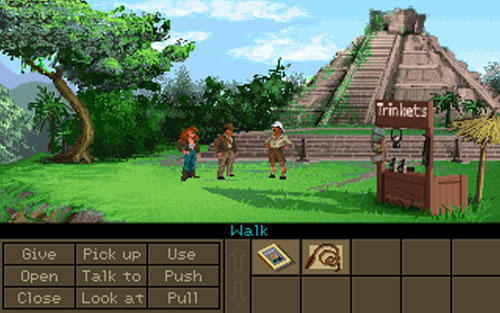 The planned sequel, Indiana Jones and the Iron Phoenix, was discontinued in 1995.

Oh man, I am seriously think about getting a Wii now. 😉 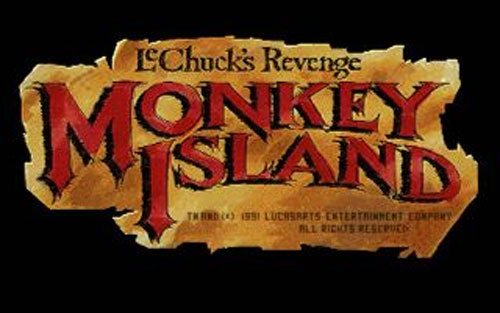 In Monkey Island 2, LeChuck’s Revenge, our hero Guybrush Threepwood returns as a pirate in search of the legendary treasure of Big Whoop. Guybrush accidentally helps bring back LeChuck, who is out for revenge. 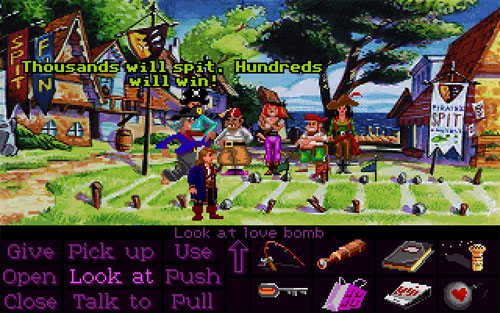 The game featured hand-painted graphics and many new locations, including four islands, making it much bigger than the first game. The game came on 11 floppy disks and it was recommended to install it on a hard drive for smoother game play. Sigh, those were the good old days. 😉

Zak McKracken was released by Lucasfilm in 1988 and follows the adventures of Zak, writer for a tabloid newspaper, and two of his friends in their attempt to prevent the nefarious alien Caponians from slowly reducing the intelligence of everybody on Earth using dial tones. The game, which takes place in 1997, takes the player from Egypt to Stonehenge and even to the Face on Mars. It would be fun to play the game again and see how much they got right and wrong in their future 1997. 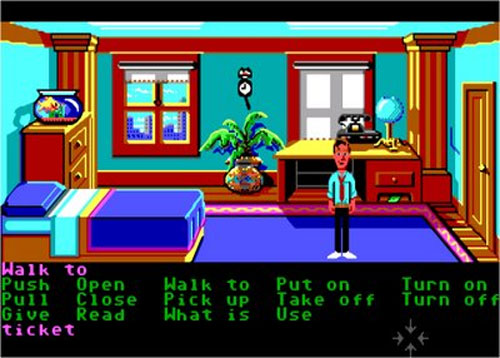 I just saw that the game has been remade by fans and you can download this fan-version here. The trailer of this new version looks great; I will have to check that out. 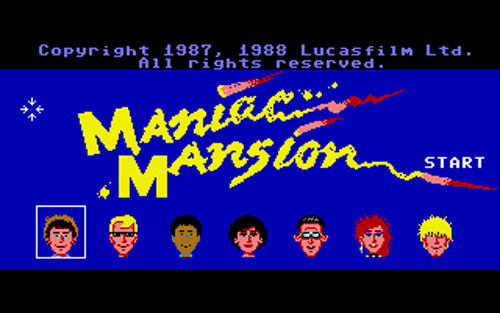 In Maniac Mansion the player can select one of six friends, and the game goes somewhat differently depending on which friends are selected. The objective of the game is to rescue Sandy, who has been kidnapped and held in a Victorian mansion belonging to the Edison family. Twenty years earlier a mysterious purple meteor fell out of the sky and created a large crater in front of the mansion. The meteor has brought about some strange changes. 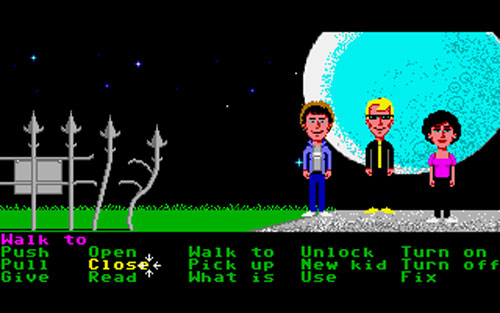 Maniac Mansion was released in 1987 by Lucasfilm and was highly rated for its gameplay and new gaming ideas. Lucasfilm developed a new engine called SCUMM (“Script Creation Utility for Maniac Mansion”) that was used to great 13 other titles, including the other Lucasfilm games above.

Reading about these games and seeing the screenshots really makes me want to play them again. They don’t make games like this anymore.

This entry was posted on Wednesday, March 11th, 2009 at 1:48 pm CET and is filed under Pop culture with tags . You can follow any responses to this entry through the RSS 2.0 feed. You can leave a response, or trackback from your own site.