We’ve had a TomTom One for several years and have been extremely happy with it. We used it intensively in Europe and here in the United States. A couple of months ago our TomTom car charger suddenly started making a high-pitched noise and a few days later it overheated and smoke (!) came out of it. We threw it away and bought a new (generic) car charger at Wal-Mart. A few days later that charger started making a high-pitched noise too. I read something about the possibility of a TomTom battery overheating from being plugged in all the time, so we concluded that our beloved TomTom had broken down.

I decided to get a new GPS for our upcoming trip to the Niagara Falls. For several weeks I looked at lots of different brands and models. I read dozens of reviews and tried out all the current models at Best Buy. Garmin is the market leader here, but I really didn’t like the way it operated. I kept coming back to the handy interface of TomTom that I’m used to.

So TomTom it was. I decided to upgrade to the new TomTom GO 730 for all its extra features. It has a wider 4.3-inch screen, speech recognition, lane guidance, FM transmitter and spoken street names. Sounds good, he? Well, we used the 730 for two weeks and were extremely disappointed with the device. I returned it to Amazon for a full refund. 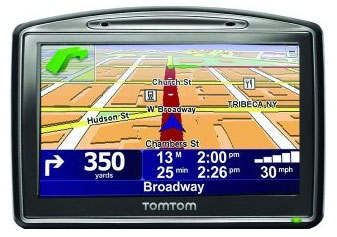 Here’s what I didn’t like about the TomTom Go 730:

I’m glad I could still return this piece of junk and I already got my money back thanks to Amazon’s excellent customer service. There are a lot of refurbished 730’s on sites like Amazon and Newegg, which should have a been a clue; lots of people must be returning them.

I did learn something valuable though. I tried the generic car charger I bought at Wal-Mart with the new 730 and it too was making a high-pitched noise. So it turns out that it wasn’t our old TomTom One that was having a problem … but the new car charger was faulty! What about that?!

I ordered an official TomTom car charger from Amazon and we are now back to using our old TomTom and we are loving it. If this one ever breaks down for good we’ll just get a new One. They are much cheaper than the higher-end models, but who needs all those new functions anyway? As long as it brings me to where I need to go I’m happy. 🙂

This entry was posted on Thursday, May 21st, 2009 at 7:52 pm CET and is filed under Shopping & Stuff with tags . You can follow any responses to this entry through the RSS 2.0 feed. You can leave a response, or trackback from your own site.

I have problems with battery after 2 months. It just don’t last more than 15 minutes, now it is 2 minutes…. ordered new battery already… it seemed to be common problem on 730, since many people complain and there is even video on youtube about hot to replace battery on 730… wtf, tomtom, don’t care?
Well, buy new battery and instead of paying money to TomTom again… download new map freely somewhere…

i hate my tom tom go 730. battery doesn’t last 2 seconds. cant copy my phone book to it. wish i never bought it