For a long time I’ve wanted to go to Kennedy Space Center in Florida to see a shuttle launch, but from the Netherlands this was never practical as launches often get delayed. Since we’re living in Illinois I’ve tried to get tickets for the last couple of launches but was too late each time as tickets sell out fast. There are only eight missions left in the shuttle program (which ends in 2010), so time is running out to see a launch.

The closest and best place to view a launch is from the NASA Causeway just 6 miles from the launch pad. Today tickets for the causeway went on sale at 7:00 ET, so I refreshed the page right at 7 and quickly went through the ordering process. Within 30 minutes they were all sold out, so good thing I got them when I did; I am now the proud owner of two tickets for the launch of STS-127 on June 13th at 7:19am. 😀 From the Apollo era until 2002, NASA used to give out free passes for cars to access the causeway. Beginning four hours before each launch, you could just drive right to the causeway in your own car. For security reasons this was all changed in early 2002, and people (with tickets) are now brought to the causeway by bus. The last bus goes 2 hours before the launch time, so we’ll have to be there at least by 5:19am. Ouch! 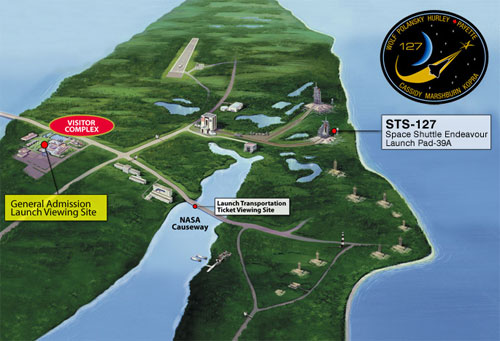 This entry was posted on Wednesday, May 13th, 2009 at 8:03 am CET and is filed under Space with tags . You can follow any responses to this entry through the RSS 2.0 feed. You can leave a response, or trackback from your own site.

Hello, I am sorry to trouble you and I mean no disrespect. But are you planning on trying to view the launch on July 11? And if you are unable to attend are you planning on selling your causeway tix? I know this will sound mellow dramatic, but please listen for a moment. My family, of 5, along with another family of 5 drove up from Key West with the hopes of seeing the launch of sts-127. Our kids are aged, 6 months, 2 years, 3 years, and 3 – 4 year olds (my friend has twins). Crazy I know, but we got up each day with a 1:30 am arrival and then an 11:30 pm arrival with our kids in tow to try to see the launch. And to top it all off, my friend fell at the hotel early wed afternoon and broke her wrist, but still rallied with her three kids to get to KSC and set up camp on the hillside with great expectations. Of course you know how that day ended, or shall I say began. I have been able to obtain 3 causeway tix (two of my children are under 3) on eBay to ‘upgrade’ our experience, but my friend has not had so much luck. So if you are unable to attend the launch attempt on July 11 and are thinking about selling, I hope you would consider my friend and her family. Thanks. Kathleen Young, Key West Florida

I am sorry but I will not be able to sell you or anyone else our tickets for this launch. It is also strictly prohibited to re-sell launch transportation tickets and KSCVC admission tickets.

i just bought a ticket last night for the july 11th launch, so obviously they aren’t sold out!

yes, KSC put tickets on sale again for the July 11th launch. I went last night (12th) and it was PACKED with people! I was not impressed that they re-sold tickets! I wish I knew that they sold tickets for the launch, I thought they would not sell more tickets until the next mission.

I understand that I can’t sell my visitor’s complex tickets, but can I give them away? Does anyone know?

What’s a good hotel to stay near the Kennedy Space Center?

@Cary, I can’t help you with that one, as we stayed quite far away in Orlando. The local hotels all jack up their prices around the launches, so we found it more economical to stay further away in a much more affordable hotel on the outskirts of Orlando.