Home » Space, Travel » No Launch For You

No Launch For You

We got up at 12:30am this morning to head to Kennedy Space Center for the scheduled launch of STS-127. Right after getting up I checked my phone for any tweets from SpaceflightNow for the last updates and it all looked good; the last one said that fueling was going smoothly and the clock continued counting down toward a liftoff at 7:17am. I proceeded to brush my teeth when all of a sudden a new message came in:

NASA has just called a scrub for today. A leak has developed while fueling space shuttle Endeavour. A news conference is planned overnight.

So no launch today. 🙁 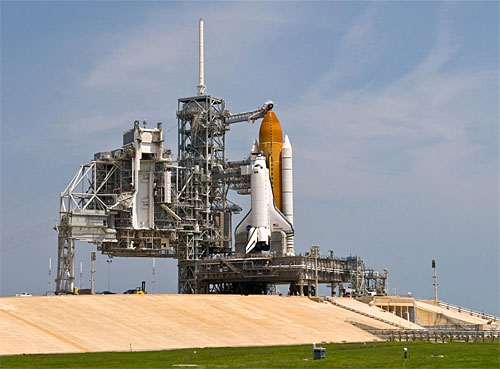 We stayed up to see the press conference at 1:45. It took more than a half hour for any news media to pick up the cancelled launch. Even the homepage of NASA.gov wasn’t updated for an hour with the news. Thanks to Twitter we knew about the cancellation before we got in our car and headed for the space center. Thank you Twitter! 🙂

I had read that Endeavour had a window of only 3 days (June 13th through 15th) because of the Atlas 5 rocket that was to launch on June 17th to bring two new satellites to the moon. In the overnight press conference they said that it will take at least 4 days to fix the leak, so we thought that’s it; no shuttle launch this month. But then, to our surprise, they mentioned in the press conference the possibility of delaying the Atlas 5 mission and letting Endeavour go first. They even said that if the Atlas 5 rocket goes first, and it launches on the 17th, then Endeavour’s still has one chance on the 20th (it takes 2 days to reset equipment between launches). Mission managers are now planning to meet tomorrow at 2pm to examine the repair plans and determine the new launch date.

We spent the day birding at the Space Coast and then drove to Orlando. We’re going to wait for the results of tomorrow’s meeting and then decide what to do. If Endeavour’s next launch attempt is on Wednesday then we will wait for that. But if the moon mission goes first and they still want to try the shuttle on Saturday June 20th then we may not wait for that and drive back. Or maybe we’ll stay and watch the Atlas 5 launch, although we don’t have tickets for that launch so it would be from far away.

We’re disappointed about the scrubbed launch but we knew this could happen. There are still 7 more shuttle missions planned until the end of next year so if we don’t see this one go up we have a few more chances. At least we had a great taste of summer, with 90+oF here every day. Whatever happens we plan to spend the day at Kennedy Space Center on Monday and use part of our launch viewing tickets that way. I’m really looking forward to that. 🙂

This entry was posted on Saturday, June 13th, 2009 at 7:32 pm CET and is filed under Space, Travel with tags . You can follow any responses to this entry through the RSS 2.0 feed. You can leave a response, or trackback from your own site.