We arrived at Kennedy Space Center at 6:00am this morning and were surprised to find all the attractions and exhibits already open to the public. They were even doing bus tours until 8:45am! We sat down in the Launch Status building and later moved to the Astronaut Encounter building to watch live programming from NASA tv while we waited. KSC does such an excellent job accommodating launch guests; back in June during the night launch everything was open in the middle of the night. (Photo © NASA) View of Shuttle Atlantis on Pad 39A this morning

At 9:15am we had our ‘breakfast with an astronaut’ in the Early Space Exploration building. There was a HUGE line of people and the doors opened a bit late at 9:30am. The breakfast was held in a large room with round tables and about (I guess) 200 people were there to have breakfast. There were eggs, bacon, biscuits and gravy, sweets and fruit. After a little while astronaut Frederick D. Gregory came out and held a little talk about today’s mission and the new Constellation program before taking some questions from the audience. It was a fun event to attend. (Photo © NASA) At the Astronaut Encounter we watched live NASA tv and saw the astronauts arrive at the shuttle in the Astrovan and then getting suited up in the White Room.

Buses to the NASA Causeway for those with causeway tickets started going at 11:30am. We headed to the buses around this time and were surprised that we were probably among the last 10% of causeway people to get on a bus. Many visitors remained at KSC to view the launch from there. Watching from the KSC is a restricted view (you only see the shuttle above the trees after it has left the pad) but bleachers and large screens had been set up and hundreds of people were already camping out on the grass.

Our bus drove the 15 minutes to the causeway where about 150 buses were parked three rows deep. The viewing area was HUGE. Being among the last to arrive there I thought we might have had to sit behind other people, but there was still a few hundred yards of unused space right by the water. At some points the view was slightly obstructed from small islands in the Banana River, so we walked along the water away from the bus until we found the perfect spot to set up our two chairs and spotting scope that we had been lugging along all morning. 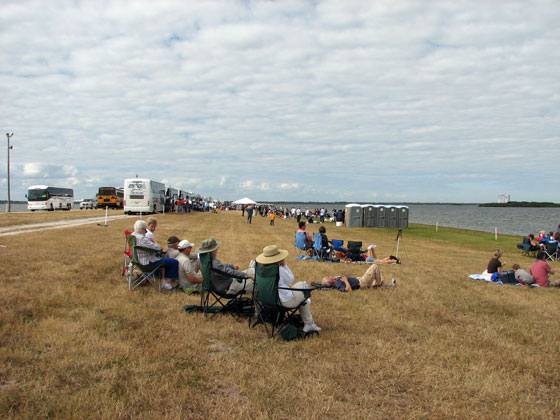 View of the part of the causeway where we were sitting; this went on and on into the distance with more than 150 buses on the left

In the next half hour many more people arrived (also on non-NASA buses) and it quickly filled up behind us. We had a good place. I was really amazed of the great view we had. We sat 7 miles away and I thought the Shuttle would be a small speck in the distance, but through the scope I could even read the word “Atlantis” on the wing! There is one closer viewing area at the Saturn V building, which is 3 1/2 miles away … but our bus driver told us that from that angle the shuttle is hidden behind the Rotating Service Structure, so we had the best view of the orbiter on the pad. 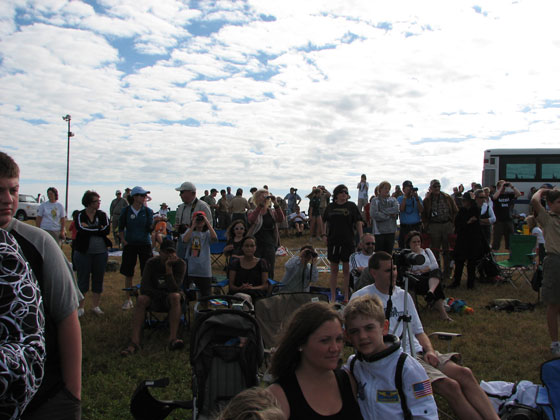 Commentary from NASA tv was playing on the speakers so we could hear what was going on. I was also getting tweets from Spaceflightnow.com. All morning there was a thick layer of clouds above Cape Canaveral and chance of weather constraints prohibiting flight were 30%, but as the morning progressed the clouds slowly moved away and at launch time weather was good. Through the scope I could clearly see the removal of the walkway and beanie cap after the 9-minute hold, but I think I was the only one in our vicinity witnessing this as most people just had small binoculars.

At T-minus 16 seconds the Sound Surpression System is activated and 300,000 gallons of water are poured onto the launch pad to surpress the decibels from damaging the orbiter. I could see all the water clearly through the scope as well as the sparks from the burn ignitors to start the main engine. 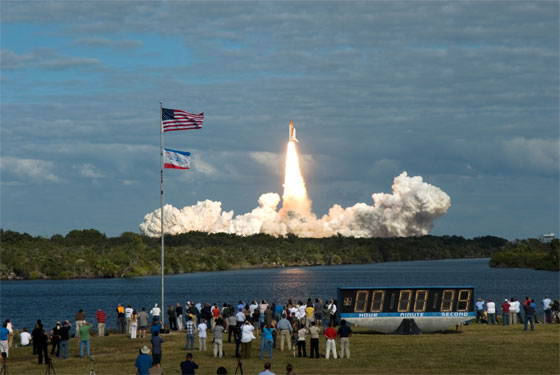 (Photo © NASA) View from the press area with the countdown clock

Here’s an HD video of the launch from NASA:

It was a tremendous sight. A huge cloud, then the shuttle became visible with its extremely bright engine flames below and about 40 seconds after lift-off the sound wave hit us. I followed the shuttle up with the scope. Two minutes and 10 seconds into the flight the two solid rocket boosters were jettisoned and I could see this clearly through the scope as well. Everyone around me was already packing up as they could no longer see the shuttle, but I was seeing the shuttle and both solid rocket boosters fall down. A few seconds later I lost sight of the shuttle but I could still see the two rockets fall down for about 20 seconds until I lost them in the clouds. Wow.

A few minutes later a woman came on the intercom and dryly announced: “A huge dark cloud of hydrochloric acid, which you can see above the launch pad, is blowing in our direction. Please move to your bus immediately.” … Holy crap! We quickly got our stuff together and headed for our bus. The papers for the launch had a disclaimer about the risks of attending a launch (among which thunder storms and the fact that droplets of hydrochloric acid that appear after launch can cause some mild skin irritation). As far as we know everyone made it to their bus and no tourists were killed by the acid. 😉

It took about 20 minutes until our bus left (we saw two dolphins swim by in the meantime!) and we got back to the KSC about 15 minutes later. It was incredibly busy at the Space Shop as we picked out some souvenirs and then headed to the car. It wasn’t very bad to get out of the area and we were in a short traffic jam for only a few minutes. 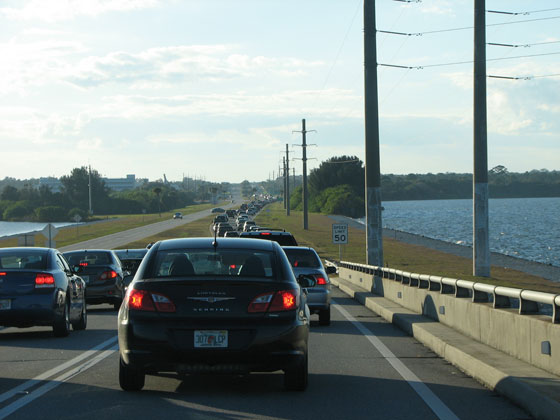 This entry was posted on Monday, November 16th, 2009 at 9:29 pm CET and is filed under Space, Travel with tags . You can follow any responses to this entry through the RSS 2.0 feed. You can leave a response, or trackback from your own site.