Today we visited the Dutch Ice Sculpture Festival here in Leiden. The theme is the artist Rembrandt van Rijn. In 2006 Leiden celebrates the 400th anniversary of Rembrandt’s birth with different museum exhibits, festival events and other special expositions. The Ice Sculpture Festival features statues and scenes made of ice and snow, taken from the painter’s works and life. 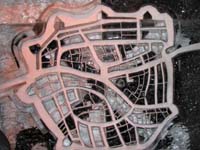 The sculptures were created by a team of 50 artists from the Netherlands and other countries. The group worked on the 27 pieces from November 1 to 14.

The sculptures are held in a special thermal tent on the grounds of the Groenoordhallen expo complex. The tent covers an area of about 2,500 square meters and is kept at a constant temperature of -8o C (about 17o F). 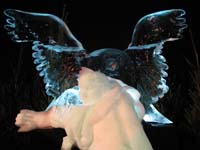 The exhibit uses about 300,000 kilograms of ice. Blocks of ice were kept at the temperature -30o C for up to six weeks before the work began, to give the ice good transparency and an attractive blueish tint.

Along with the ice, snow was also carved into shapes and figures. Approximately 150,000 kilograms of snow were made in the tent using a special machine. 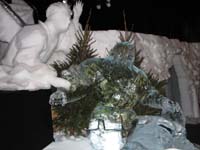 This is the third edition of the national festival. The previous two exhibits took place in Eindhoven. Click here for photos from the 2003-2004 edition.

The festival began nearly 2 months ago, on December 17, and has been receiving a steady flow of visitors since then. The 50,000st visitor came on 6 Janaury, the 100,000st on 17 January, and the 150,000st ticket was purchased on 2 February. Today the hall was very crowded. We had to shuffle by several exhibits to wait our turn for a look and a photo. 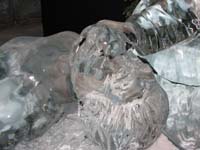 After buying tickets, visitors enter the hall and pass by a stand selling Rembrandt-related merchandise, including wine, DVDs, chocolates, umbrellas and scarves.

The next room is a large lounge area, where refreshments like warm drinks and apple pie are sold. Then after passing some space heaters, visitors enter the thermal hall. 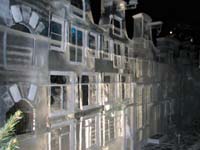 Even with the hall as crowded as it was, we had a good look at the whole exhibit in about 30 minutes. Afterwards we were happy to warm our fingers by the space heaters and sit in the lounge with a hot chocolate to warm up.

The festival runs until 26 February in the Groenoordhallen exposition complex in Leiden. It is open daily 11am to 6pm. Admission is €7.50 for adults, €4.50 for children 4-12. There are programs available at the ticket booth for €1. 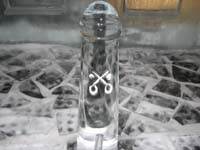 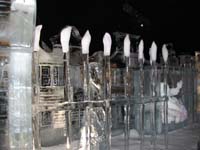 This entry was posted on Sunday, February 12th, 2006 at 4:40 pm CET and is filed under Leiden, Life in Holland, Travel with tags . You can follow any responses to this entry through the RSS 2.0 feed. You can leave a response, or trackback from your own site.