Last weekend we drove down to Brittany in France and visited some nice places; we canoed in Brière nature park, saw prehistoric megaliths in Carnac, walked along the coast in Amorique nature park, and visited the medieval town of Guérande. Here is a short report of our road trip, along with some photos.

We left Thursday afternoon, June 1st, and drove south until around 10pm and checked into a Formule 1 hotel near Amiens on the A1 autoroute between Lille and Paris. It was as far as we could get, as we had encountered many traffic jams in the Netherlands and Belgium.

The following day we drove on toward Nantes and visited Guérande. The beautiful medieval town, which dates from the 5th and 6th centuries, is located in the Loire-Atlantique region of France, which is famous for its salt marshes. Everywhere in town small shops were selling salt-related products.

In the afternoon we came across the very nice Parc Naturel Régional de Brière and walked around the Chaussée Neuve area. We saw Sacred Ibis, Spoonbill, many other birds, and also one or two Muskrat.

That evening we stayed at campground Les Chalands Fleuris in Saint-André-des-Eaux, which is a small town inside the Brière. We set up our new 3 Seconds Air Quechua tent from Decathlon (which is very nice; it sets up in 3 seconds, it is very large and it has two large vents on the sides).

The campground had a pool that was open from 7 to 9pm, so we first had dinner at the only restaurant in town — a pizzaria — and were at the pool at 8:10pm to have a short swim. But the woman at the desk said that the register had closed at eight!! (“What?!?”). But surely we would be able to get in, because we had free tickets from staying at the campground, right?! Unfortunately that would be impossible, because the register was already closed. After much deliberation and speaking with two colleagues she decided to pay us a HUGE favor and let us in. But we were told that it was HIGHLY exceptional!!

The next day we went back to Chaussée Neuve and rented a canoe from ‘Michel Crusson’. We canoed for about three hours, which was very relaxing and enjoyable. We saw more Sacred Ibis, Terns, kites, hawks, buzzards, and others. Muskrats were swimming in front of our canoe! We were the only ones out there, and we followed a 3-mile route from a small hand-drawn map that the girl from Michel Crusson had given us.

Back at the car parking we also spotted a Little Owl on a barn roof.

In the afternoon we had lunch among the salt marshes of Guérande, where we saw lots of Little Egrets. After that we drove on into Brittany and arrived at Carnac, famous for its more than 3,000 prehistoric megaliths. There are standing stones all over the region, but north of Carnac are three ‘alignments’ of stones together. Tradition claims that the reason they stand in such perfectly straight lines is that they are a Roman legion turned to stone by Merlin. Visitors are not allowed to walk among the main alignment, now that a fence has been erected around the sites. We also visited the Tumulus St Michel and one other site with one huge stone and smaller stones in the shape of a rectangle, appropriately named Le Géant et le Guadrilatère de Manio.

That evening we drove on west to the Amorique Nature Park and made camp at a cute small campground near Chateaulin named Ty Provost. The campground had just opened for the season on June 1st, and we were practically the only visitors. We picked a spot for our tent with an awesome view over the valley. 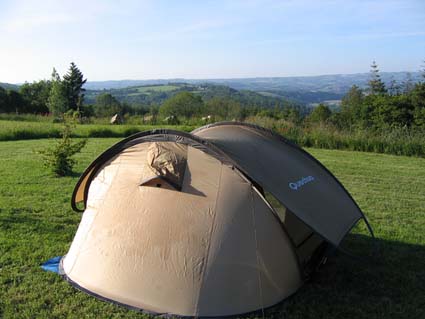 The next morning we had a great walk on the west coast of Brittany, south of Brest, near Camaret-sur-Mer. We had hoped to see Puffins, who breed along this coast, but we didn’t see any.

In the afternoon we drove along the northern coast of Brittany and made a short stop in Roscoff for lunch, but it was nearly impossible to park. The town was packed with parked French cars; in every nook and cranny there was a car parked, but there were not many people around — it was almost creepy. We managed to find a place and walked around the harbor and watched the gulls. There were many British and Irish people around as the town has a large port where ferries arrive from the British isles. 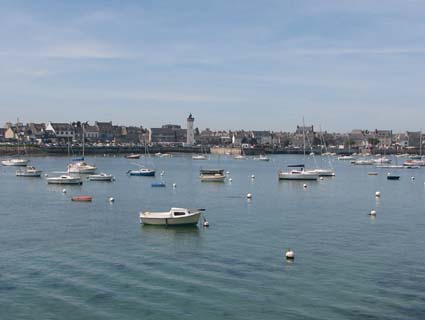 In the evening we checked into a campground on the Normandy coast in Tourgeville, and in the evening we drove to the popular seaside resort of Deauville, which had a beautifully restored center. We had fish dinner at Le Nautica (which was very good) and then walked around the town and looked at the huge expensive houses along the coast.

The next day, on Monday June 5th, we had our breakfast on the super-wide beach of Deauville and then drove back home.

This entry was posted on Wednesday, June 7th, 2006 at 8:58 pm CET and is filed under Nature, Travel with tags . You can follow any responses to this entry through the RSS 2.0 feed. You can leave a response, or trackback from your own site.

I read with interest about your Quechua tent – if you would like to email me a picutre a brief description I can add it to my blog – I am hoping to get different tents and thier owners opions added to it by merry campers.

we have a quechua tent and I am very interested to see what your opinion of these throw-up tents is! We have seen a lot of them on camp sites but are wondering how they stand up to a bit of wind and rain.

Look forward to hearing from you – Amanda

Hi there , i was looking for websites similar to mine on about asia travel and i was directed to your post Report of our short road trip in France: Guérande, Carnac, Amorique, Deauville , i must say that your post is informative – I shall bookmark and link back to you