We like to camp over weekends in the summer, but the hassle of setting up a small tent for a short getaway can make a short camping trip less enjoyable. When we first saw the 2-Second tent by Quechua at Decathlon, a sporting-goods store, we had to try it. Now we have the 3-Second Air tent and we love it. Here is a short review of both.

Quechua 2-Second
We bought the 2-Second tent last year and used it on a couple of trips. Setting it up is as easy as it looks. Just make sure you are holding the tent in the proper position, then let it fly! Putting the tent back together takes some time to get used to. The instructions included with the tent are very clear and after some practice it is quite easy for one person to fold and roll the tent back into the start position and put it back in the backpack sleeve.


Setting up the 2-Second tent

The 2-Second tent is quite small and with moisture building up on the tent overnight, we woke up with wet sleeping bag edges and pillows. For two people we found this tent to be a bit too small, but the ease of set-up made it worth it, and we would have been happy to continue using it, if the bigger 3-Second tents had not been introduced this year. 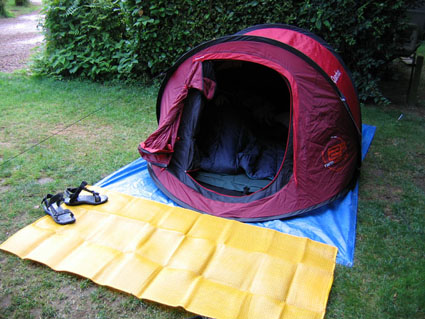 2-second Quechua tent, all set up

We have used the 3-Second Air tent on one trip this year, a long weekend to Brittany and Normandy in France. The bigger tent was a lot more comfortable than the 2-Second tent. Although moisture accumlated on the tent each night, in the mornings we were dry because we had the extra room around the sleeping bag inside the tent.

The “Air” part of the name refers to two vents which can be opened on the sides of the tent. This year Quechua introduced the bigger 3-Second series; the Air feature is available on both sizes. They also have a 2-Second XL, which has the entry on the side of the tent which allows for extra storage space between the entry and the interior. All of the models can be seen on their website, seconds.quechua.com.


Setting up the 3-Second tent

The bigger tent is a bit more difficult to fold and roll back into the start position than the smaller one. The job definitely requires two people in order to be done right. One person can hold the half-folded tent upright while the second one performs the fold and roll. As with the smaller tent, we got better at dissembling it with practice. It’s great and we look forward to many more trips with our 3-Second Air tent.

This entry was posted on Sunday, July 9th, 2006 at 4:25 pm CET and is filed under Shopping & Stuff, Travel with tags . You can follow any responses to this entry through the RSS 2.0 feed. Responses are currently closed, but you can trackback from your own site.

I am currently facinated by these tents which seem to be taking over all the camp sites we stay at – one thingwe’dlike to know is how dothe yfair in wind and rain?

There were a lot of yells half way through the night at the weekend in the direction of the Quechua Seconds when the wind and rain got up quite strong.

Also we noticed that they were having a lot of trouble taking them down again!!!!

Please let me know how it handles wind as I may purchase one soon.

Once someone shows you how to do it (I suggest getting a store demo before you go camping!), they’re a piece of cake to take down – literally about 30 seconds, max. However, it’s probably a little harder if you’re not so tall (i’m 6ft).

I have the Gelert make of the 2 second tent and the first night I used it had to endure very heavy rain thunder and lightening. It did not leak but if you touch the outer fly with the inner tent then codensation if any will wet the inner, but this is true for most tents. I’m very pleased with the design.

I TRY ONLY STRETCHES DECATHLON QUECHUA 3 SECOND AIR PURCHè And IF IN OPTIMAL CONDITIONS. THANKS TEL. (ITALY) +39 347 99 300 70 EMAIL MTOSCANO@GRUPPOVENCO.IT

Thanks for putting this information up. I am considering buying a 3 second quechua. Do you think the ‘air’ version is worthwhile? Also are they only available in the UK from Decathlon (sold out) and ebay (no 3 second air)?

Hi Mark, I find the ‘air’ version is VERY worthwhile; especially when you’re staying at one place for a long time it’s nice to air out the tent from three sides instead of just one. When we used our tent it was a bit cold at night, but we still left the side windows open because the fresh air was so nice; it’s almost like sleeping outside. We bought our tent at Decathlon in the Netherlands, and I *think* they’re only sold at Decathlon stores. Quechua has a website that shows the tents but you can’t buy them online and it points to ‘your nearest Decathlon store’.

As of Oct 4, 2006, Decathlon has started shutting down it’s US operations, and has instituted a recall of many of the 2006 2- and 3-second Quechua tents because the material may fail to meet flame retardency standards. They are offering full refunds plus a $10 spiff.

Disappointing: I only got to use my tent once…no wind, no rain, but otherwise it worked great. Not apparent whether updated models will be offered anytime soon.

where do you get one