Last Saturday was Open Monumentendag, or Open Monument Day, in the Netherlands. Leiden goes a step further and celebrates Openmonumentendagen, or Openmonumentenweekend, opening up over 30 monuments, museums and historical buildings for the entire weekend. Each year the tourist bureau in Leiden also publishes a guide for visitors, with suggested walking or cycling routes.

The event was a huge success this year, with more visitors on Saturday than the entire weekend last year. Certain monuments could only be viewed or visited during a guided tour; the Latijnse School (the Latin School, where Rembrandt attended classes) was already fully booked for the weekend by Saturday afternoon. There were huge waits to visit the Gravensteen (old city jail) and Pieterskerk (St. Peter’s Church).

We happened to be at the Hooglandse Kerk at the time, and I happened to have climbed up the tower just as the paramedics were attending to the sick woman. I had to climb down the tower using a second staircase, which was very poorly lit and nearly pitch black in some places. When I came outside the church a crowd of spectators had gathered to watch the fire truck’s ladder being used to bring the woman down. I hope she’s okay.

These are the monuments we visited on Saturday:

Zijlpoort
In the 17th century Leiden was enclosed by a city wall with eight gates. Today two of the gates still stand, including Zijlpoort, which was built in 1667. Today this gate serves as a restaurant which was opened in 1999. During restoration a portion of the city wall around the gate was rebuilt.

Museum Het Leids Wevershuis
Leiden is full of ‘wevershuisjes’, small houses like this one which were once home to cloth-makers (weavers). This house was built in the 1620’s and became Leiden’s newest museum when it opened to the public during Open Monument Weekend 2005. The interior of the house is very simple and stands as it did in the early 1900’s. 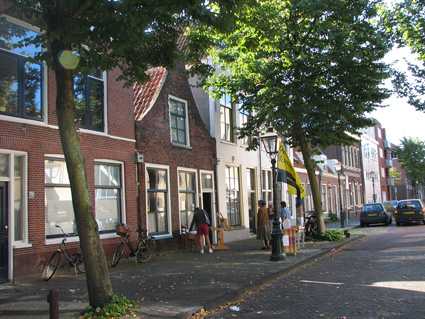 Hooglandse Kerk
Construction on this huge church began in the late 1300’s. Especially remarkable here is a giant clock mechanism which dates from 1607.

Stadhuis
The Leiden City Hall was built in the late 1500’s, shortly after the defeat of the Spanish (celebrated each year on 3 October). Meeting rooms and offices were open for public viewing. The most interesting things we saw here were the inlaid woodworks by M.C. Escher in a few rooms. 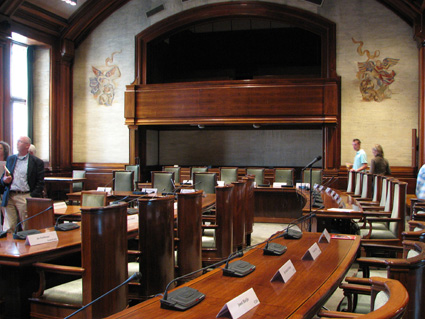 Waalse Kerk
After Leiden kicked out the Spanish in 1574, Protestants from Belgium and France flooded into the city, where they were welcome. So many Wallonians came into Leiden that they had their own French-speaking neighborhood. In 1818 they established this church.

SieboldHuis
This museum at Rapenburg 19 houses Japanese treasures from the personal collection of Philipp Franz Balthasar Von Siebold. The building dates from the early 1500’s. The museum opened its doors in 2000 and underwent extensive restoration work in 2005.

Hotel de Doelen
The buiding at Rapenburg 2 dates from 1668. The breakfast room and 18th century staircase were open for public viewing.

Rapenburg 29
This is a beautiful old canal house which was also open during Monumentenweekend last year, during renovations. The renovation is complete now and a family is living in this beautiful house. One remarkable detail is the mural on the dining room ceiling, which was rediscovered during restoration done in the 1950’s. 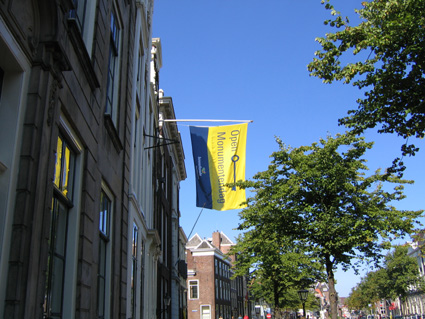 A Open Monumentendag flag in front of Rapenburg 29

This entry was posted on Thursday, September 14th, 2006 at 12:30 pm CET and is filed under Leiden, Museums with tags . You can follow any responses to this entry through the RSS 2.0 feed. You can leave a response, or trackback from your own site.