Home » Life in Holland, Nature, Travel » Our visit to Texel

Our visit to Texel

Last Sunday we visited Texel! We first took an early train (7:00) from Leiden to Den Helder, which lies in the northern-most tip of Noord Holland. On the way we saw a Spoonbill and our first Crane (Kraanvogel). When we arrived in Den Helder, we took a bus to the harbor and there stepped onto the TESO ferry to Texel, which is the largest and most populated of the Dutch Frisian Islands and also the westernmost of this archipelago, which extends to Denmark.

It was another beautiful day in April, which is now officially the hottest and driest April ever recorded in the Netherlands. After just twenty minutes the boat pulled into the tiny harbor of Het Horntje. There, the cars, campers, bikes and pedestrians poured onto shore. Along with many other day trippers, Amy and I walked over to a large warehouse, packed to the ceiling with thousands of rental bikes. After a swift registration and money exchange (only €7 for a bike with gears) we were on our way to explore the island (see our route on a Google Map).

We headed first to Den Burg, which is the largest town on Texel, but also the least touristy. The town was practically deserted and everything was closed. We wanted to visit the VVV Tourist Office for information on the island, but the office was closed on Sunday. We had a drink on a terrace in the center and then headed for Ecomare, which is a museum, animal refuge, and official visitor center for the island and the Duinen van Texel National Park all in one! There were long lines of Dutch and foreign tourists eager to put down €8 per person to see the exhibits. The place looked very interesting and certainly worth a later visit to the island, but this day we only had a look at the free exhibit of the National Park (which was nicely done), bought a map of the area and a small booklet about birdwatching on the island, and headed back outside. After a short walk into the dunes we got back on the bikes and headed north toward De Koog. 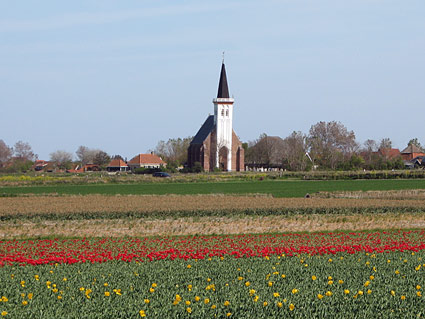 Outside the entrance of Ecomare we found a large receptacle that people can use to leave sick or wounded birds in case the center is closed. The top of the box had a picture of a Gannet (Jan van Gent) with an explanation that the birds are able to rest in the dark and animal caretakers regularly check the receptacle. I thought that was quite nice.

The dunes on the entire west and south side of Texel form a National Park, with Ecomare in the center. Texel has 135 km of biking trails, and many of these are among the forests, heathland and sandy dunes of the park. We followed the bike path north, and after a short ride we arrived in De Koog. Unlike Den Burg, this small town was teeming with activity; this was a happening place, with dozens shops, bars, restaurants and clubs. We had a quick look around the main street and sat down for lunch.

After De Koog we followed the biking trails north to De Muy, where our booklet about birdwatching showed a picture of hundreds of breeding spoonbill. Unfortunately the area was closed for the breeding season, something we could have read in the book. We still had a nice walk around the area and saw several frogs.

From here we started bicyling back south toward the harbor, which was about 15 kilometers away, following the bike paths through the national park. We made a few small detours to have a quick look at the beach and some birding locations. At one place, De Geul, we walked up to an observation area and looked out over a small lake where dozens of spoonbills were flying back and forth to their nesting area. About a half hour later, close to the harbor, we saw a spoonbill walk in a field next to the road. It was just 10 meters away from us and we could look at it for about 5 minutes as it was slowly walking by. This was the best observation of a spoonbill we ever had: 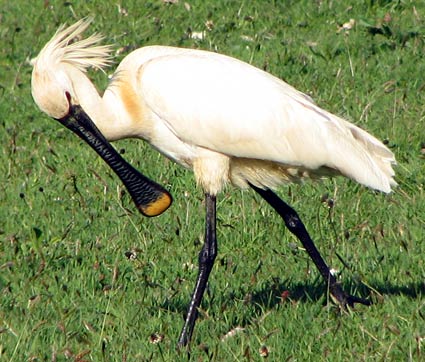 We arrived back at Het Horntje at around 17:45, turned in our bikes and got the 18:00 boat back to shore. Back in Den Helder we missed our bus so we walked back towards the train station. Walking through the city gave us the opportunity to look for a restaurant, and we found a very nice restaurant named De Buren van Pieck (The Neighbors of Pieck, as the restaurant is located next to the birth house of famed Dutch artist Anton Pieck), where we had a wonderful dinner. Amy had salmon with lobster sauce and I had stuffed peppers in a vegetable stew.

With out bellies full we headed to the train station and had to run to make the 20:00 train. We were back home at 22:30.

Oh yeah, and of course we saw lots of sheep. Check out this cute lambkin: 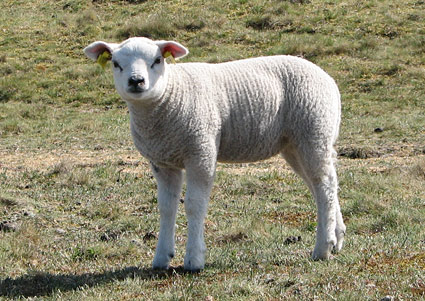 This entry was posted on Wednesday, May 2nd, 2007 at 8:09 pm CET and is filed under Life in Holland, Nature, Travel with tags birding, netherlands, texel, Travel. You can follow any responses to this entry through the RSS 2.0 feed. You can leave a response, or trackback from your own site.