Yesterday we visited the sewage plant North East of Sharm El Sheikh in Egypt to look for birds. We had a very hard time getting there as our taxi driver didn’t speak English (see the directions below), but the visit was well worth all the trouble. We saw many birds, including thousands of White Storks! 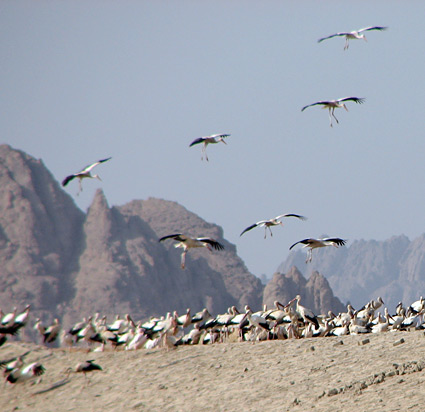 Storks were arriving by the hundreds as they came flying in from the mountains. Egypt is a very important country on the stork’s migration route along the Eastern flyway.

During autumn, at least 500,000 storks pass through Egypt (or 80% of the European population, we read somewhere), the majority flying through Eastern Sinai. We were amazed by the many storks arriving here from the mountains, especially after we had just spent over a week in Southern Sinai and had not seen a stork anywhere! On this photo (click to enlarge) you can see the Storks flying in from the North. It was like a stork highway and they came from as far as you could see.

What was also remarkable were the dozens of dead storks laying everywhere, which was the one thing that most interested our bored taxi driver who was instructed by the policemen to stay with us as we walked around the area. He made sure to point each one out to us.

As we watched the storks on the other side of the pond, a squadron of White Pelicans came gliding in and set down among the tight pack of storks: 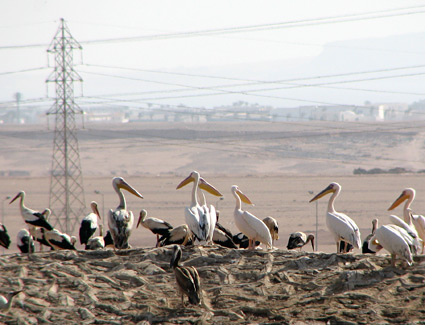 Another treat were the (Common) Cranes walking around. We had never seen cranes except for a flash of one from a train in Holland (trip to Texel in May 2007). 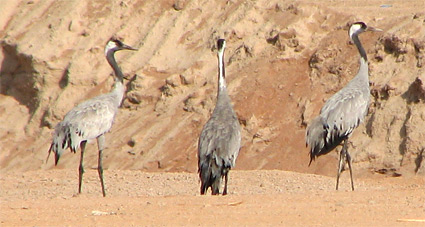 We were also pleased to find one of our target species, these Spur-winged Plovers, which we had earlier this year also seen in The Gambia (January 2007). 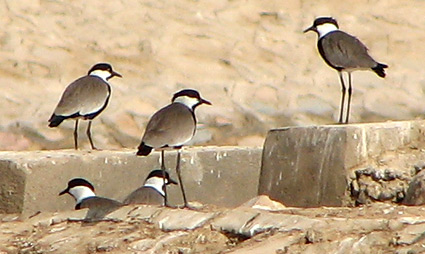 There was a lone Glossy Ibis walking among the rubbish: 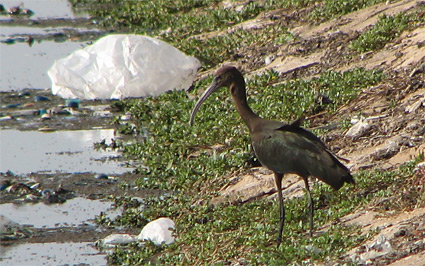 The place was also crawling with Black Kites: 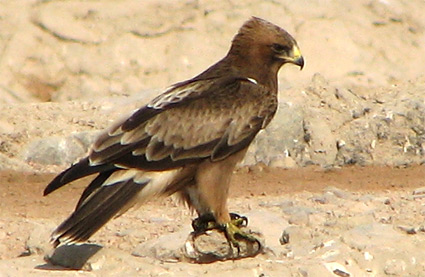 A few days earlier we had visited St. Catherine’s Monastery at the foot of Mt. Sinai looking for Sandgrouse and Sinai Rosefinches, but didn’t find any. But here at these sewage ponds we did find this group of Spotted Sandgrouse and Crowned Sandgrouse, which was a nice bonus:

Birds we saw on our visit: Thousands of White Storks, 6 White Pelicans (of which 2 juveniles), 5 Common Cranes, a Little Egret, many Black Kites, lots of Red-throated Pipits and Pied Wagtails, a Common Snipe, Spotted and Crowned Sandgrouse, Redshanks, Common Terns, a Glossy Ibis, two Common Coots and about 20 Spur-winged Plovers.

We used directions from trip reports by Richard Bonser, Bob Swann and Graeme Wallace, but still had quite a hard time getting there due to a blocked road, a confused non-English speaking taxi driver and suspicious policemen who all had no idea where we wanted to go. Here’s a map (taken from Google Maps) that might help you find the ponds: 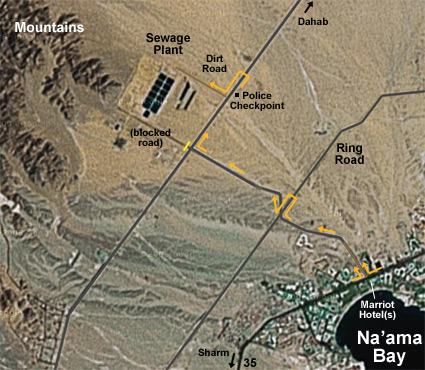 How to get there

From the ring road you can already see hundreds of storks sitting on the concrete side of the ponds. Our confused taxi driver stopped at the police checkpoint and had a discussion with the policemen who all had no idea where we wanted to go. We pointed at the storks and told them that we wanted to look at birds at the ponds, but they seemed to not understand the words ‘sewage’, ‘ponds’, ‘water’ or even ‘birds’. In the end the policemen gave in and let the taxi driver take us there but they told him to stay with us at all times. During our walk around the ponds we saw another tourist drive around in a rented car but he didn’t get out of his car. We wondered if the police told him to not get out of his car. It must be very suspicious to them to see us at a government facility with binoculars, cameras and spotting scopes. 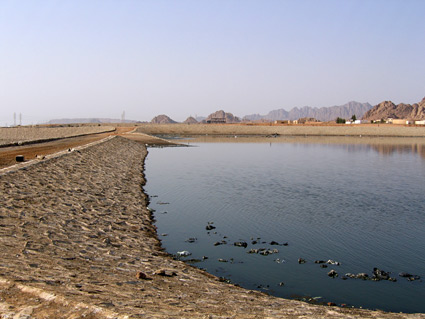 This entry was posted on Wednesday, October 17th, 2007 at 6:17 pm CET and is filed under Birds, Nature, Travel with tags birding, egypt, sharm el sheikh, Travel, white storks. You can follow any responses to this entry through the RSS 2.0 feed. You can leave a response, or trackback from your own site.

Hi again. Did you manage any photos of Spotted Sandgrouse?? I only saw Crowned and Leichensteins in September

thank youy Avery usefull I Will go birdwatchinh in 15 Days