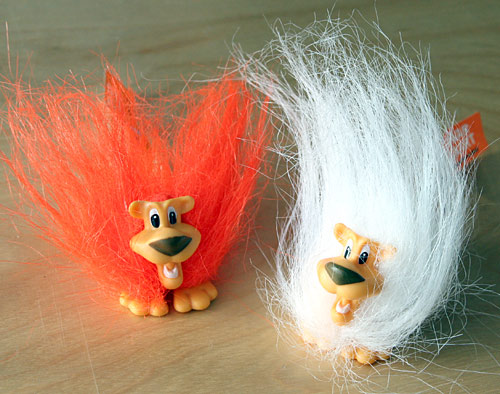 If you collect three Welpies, you can turn in the ends of their tails for a Mega Welpie or a Welpie Cap. According to Welpie.nl, there are 700,000 Mega Welpies and 200,000 Welpie caps. Today our local AH appeared to be out of caps and nearly out of Mega Welpies.

Two years ago the Wuppie campaign was a huge success, with Dutch soccer fans coveting them so much that they sold for up to four times their original price on eBay and some were even stolen from cars. There is another article about Wuppie-mania here. I wonder if the Welpie campaign will be as successful?

This entry was posted on Wednesday, June 4th, 2008 at 8:59 pm CET and is filed under Life in Holland, Shopping & Stuff with tags albert heijn, football, netherlands. You can follow any responses to this entry through the RSS 2.0 feed. You can leave a response, or trackback from your own site.