The flight was pretty smooth. We got dinner (choice of chicken or “meat”) at about midnight. The head crew member looked like Dustin Hoffman. The sky was clear for most of the fight and we had nice views over Holland, Germany, the boot of Italy and Crete before flying over the Mediterranean. There was no entertainment system in the plane. Arthur watched some shows on his P-2000 while I tried (mostly in vain) to doze. The time passed very slowly before we finally landed a bit earlier than scheduled, at 4:40 local time.

After deplaning we got on a bus to the airport building and waited in line for our visas. We pinned some cash and waited for the luggage, which came really quickly. Then we went outside and found the bus which would take us to our hotel, Les Rois. There were people on our bus from three different hotels, and we went to the other two hotels first, before finally getting to Les Rois. We got to our hotel room at about 6:45 and retrieved our key at the reception. We had been told to leave our luggage downstairs. The bellhop would deliver everything to the rooms “soon”. After 20 minutes Arthur couldn’t stand it anymore and went down to get the bags. The porter tried to forcibly keep the bags but Arthur managed to snatch them away and run upstairs with them (no mean feat, they were heavy!). Finally with our luggage in the room we could get out of our grimy clothes and get some sleep. We hit the pillows at about 7:10

We woke up at about 10:40, stinking hot. The air conditioning was blowing, but the air wasn’t cold any more. We took showers and went out for a walk in the blazing heat. We moseyed down to the hotel’s beach, desolate and a bit sad, closed off behind a palm-leaf fence. We stopped at a little grocery shop and got three bottles of water and one bottle of Coke. These were confiscated at the hotel, due to their ridiculous ban of outside food and beverages. Arthur was really steamed. I batted my eyes and said please a lot, and finally they let us bring in one bottle of water (the one that was already opened) and the Coke. The other two bottles were stored behind the reception desk; we could pick these up when we left the hotel.

We went up to our room to change, then went for a swim in the hotel pool. We played with a ball for a while and then dried off in the sun. We went back to the room and changed into dry clothes and rested a bit. We had planned to walk to some dive centers to see which dive shop we liked the best of the several shops I thought looked good on the internet. But walking between even two shops would take several hours; Hurghada was a lot more spread out than we realized. So I took a chance and called the first shop on our list, Colona Dive Center. They would be able to accommodate us the next day, and arranged to have us picked up at our hotel at 8:00.

Then we went down to lunch. We were told to be there at 14:00 SHARP, and we were. But we had to wait, lunch was late. At 14:15 we could finally go to the small buffet. The food was a bit sad, with very rubbery, warmish fish, reheated rice and greasy potato cakes, and bony chicken wings. There were no drinks that we could see. We ate a little bit and quickly made our exit. We rested a bit again in the hotel room before going back to the lobby to hear the spiel from the local agent from Sky Tours, Yasser. Afterwards Arthur asked him about the food and drink ban in the hotel, and Yasser said we should be able to bring in one bottle each, and that food was allowed to be brought inside. If we had any trouble in the future we could call Yasser and he would straighten it out.

After the briefing we went outside again, this time walking towards Sekala, an older part of town. Les Rois is situated between Sekala and “New Hurghada”, a long stretch of resorts, tourist bazaars, restaurants and bars. Immediately surrounding Les Rois is a minefield, so for about a kilometer in either direction there is only the road with rocky desert sand on both sides. 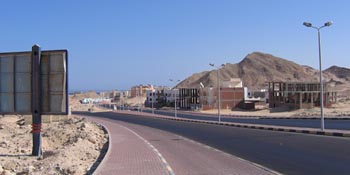 The road to Sekala

In Sekala, we bought a laminated Red Sea fish identification card for only 1 euro, then sat on the terrace of a shisha bar and had a drink. I ordered fresh mango juice, but it was a bit too pulpy, more like a wet, mutilated mango than a glass of juice. I couldn’t finish it.

At about 18:00 we turned around and started walking back to the hotel. We took a different route back so we could stop at Felfela for dinner. We had eaten at the Cairo branch of this Egyptian restaurant back in 2003, and we looked forward to having a meal here. We were not disappointed. We each had an appetizer of soup (I had lentil – yummy) and main course of fresh fish. We were also served hummus with flatbread as a starter. The food was very good but the atmosphere was even better. We sat outside on a terrace high over the Red Sea, with a view back towards Sekala. The weather was ideal and we watched a big orange moon come up over the gently lapping water. Other diners included both locals and tourists like us. It was a great meal.

We walked back to the hotel in the dark. It was a bit scary because there were no sidewalks or street lights, barking stray dogs in the mine field (no kidding; there is a field with unexploded mines between our hotel and Sekala – the only part of town where there are no hotels or building sites) to our right, and often the drivers were only using city lights. However, the traffic was light so we never really felt any danger.