From 17 to 24 September we went to Hurghada in Egypt to dive. It was our first diving trip after getting our PADI Open Water certificates here in the Netherlands in July. We made two dives a day for five days with Colona Divers, a Scandinavian dive center, and saw giant morays, a sea turtle, stingrays and millions of colorful reef fish and corals. 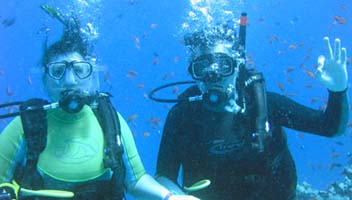 We left the house at around 18:15 and walked to the bus stop at De Kooi. The bus came at 18:30 and took us to the station, where we made the 16:44 train to Schiphol. We picked up our travel documents at the Sky Tours desk and were directed to the wrong ticket gate to check in our luggage. After waiting in the wrong line for about 20 minutes we were directed to the right place, where we waited a further 30 minutes before we could check in our bags. Many other travelers had scuba-gear bags and there were quite a few surfboards being checked in as well. Our bags were slightly overweight, but since they contained scuba gear we were allowed to be a bit over the limit.

After the bags were checked, we found a place to sit outside of the gates area and ate our homemade egg salad sandwiches and blueberry muffins. Our flight boarded a bit late and we took off about 30 minutes after our scheduled departure of 22:00. The old MD had seen better days and made quite a racket during takeoff. Applause erupted when we were finally airborne. The cabin crew was very nice though.