We got up at 6:30, showered and got ready. We went down to have breakfast in the hotel, which was a bit sad again. I had an omelette, which wasn’t too bad. But the selection of breads and fruits didn’t look very appetizing. We didn’t find any drinks expect for instant coffee. There were even a few cereals to choose from, but no milk anywhere and no one around to ask.

We went down to the lobby to wait for Colona to pick us up. There were a few other pairs of tourists milling about, also obviously waiting for their bus to take them diving (why else would anyone get up so early on vacation?!). Emperor Divers came by in their own bus and the rep got out to collect his passengers. He went to all of the couples waiting in the lobby and asked “Diving today?”, to which the answer was always yes. Then he asked “With Emperor Divers?”, to which the answer was always no, much to the dismay of the rep. After a few minutes he got back in the bus and they left without picking up anyone.

By 8:10 I was getting a little jumpy and asked Arthur to go back to the room to get the phone. About 30 seconds after he left, our bus arrived. Art was back quickly though, and we were on our way to the Magawish Resort, far out of town on the “New Hurghada” side, by way of several other resorts, where we picked up more divers. With a full minibus we arrived at Magawish at about 8:35.

We didn’t really know what to do, but all of the other passengers started walking towards the beach, so we followed. We arrived at the dive center and were greeted by Ina, a German Dive Master (DM). She had us fill in some forms and sign some papers. She had a look at our PADI Certification cards and our dive logs and wrote some things down on our forms. Then she directed us to the back of the shop where we picked up our rental vests (Buoyancy Control Devices / BCDs) and sets (regulator hoses for breathing and gauges). We put our other gear (masks, fins, boots, snorkels, wetsuits, towels, etc) into our crates (Amy #45 and Arthur #19) and put them on the wagon pulled by Colona’s donkey, Roger. Roger brought all the gear from the shop to the pier every morning, and brought it back again in the evenings. We headed out to our boat. It was all a big rush and we were on the boat setting up our gear for the first dive before we had time to think. It was chaotic and hurried, just like our classes (I guess the pace of the pool and open water lessons was also meant to prepare us for the real world). Later on the other days we got into a routine and toward the end of the week we would even be the first ones done setting up our gear. 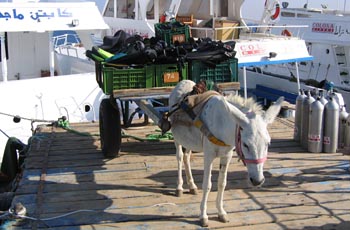 Roger the Donkey, at Colona Divers

On all of our dives, we each wore 10kg of weights, with 8 on the weight belt and two in the BCD pockets. Arthur wore a 3mm long wetsuit, and I wore a 2mm shorty. We always started with about 200 bar in our tanks. The water temperature was always 28oC and above the water it was 34oC. With Colona Divers, we were limited to one hour per dive. 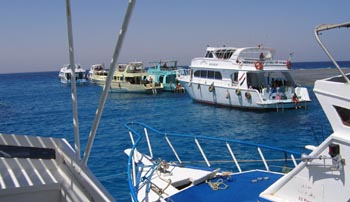 The boat Queen Samira brought us to our first dive site of the day, Gotha Abu Ramada East (also known as ‘The Aquarium’), which took about 45 minutes. The plan had been to do a ‘drift dive’, which meant all divers in the group would have to jump in the water from a slowly moving boat within seconds of each other. Ina saw a bit of fear and shock in my eyes when I heard that our first dive would be a drift dive, so she reassured me that it would be very easy. However, she came back to us a little later and said we would make a stationary dive with a different DM. So Arthur and I went down with Yvonne, an instructor from Sweden. After a quick buoyancy check, we descended and swam around the south side of the large, round reef. Besides many common reef fish, we saw a Devil Scorpionfish, a Crocodilefish, Trumpetfish, Parrotfish, and Arabian Picassofish. At 49 minutes, this was one of our shortest dives.

After the first dive we dismantled our gear and set it up again for the next dive. We had a delicious lunch of traditional Egyptian food, like eggplants sautéed in tomato sauce, brown rice and flatbread. There were also salads and pasta. It was quite a spread of yummy food. When everyone was done eating, the boat sped off to the next dive site. 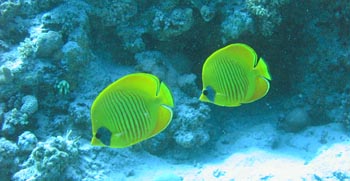 Our next dive site was El Aruk ‘Gigi’. Again Arthur and I went with Yvonne. This dive site consists of 11 ‘aruk’ (plural of ‘erg’ – an underwater coral pinnacle). I brought our underwater camera, a Canon A70 in the Canon housing, for the first time. We swam around the aruk. On this dive we saw: Emperor Angelfish; Red-Tooth Triggerfish; three different Blue Spotted Stingrays, and a Lionfish swimming out in the open. It was great to bring the camera to capture some of the things we saw, but it also made the dive a bit different for me, as a lot of it was seen via the LCD on the camera.

After the dive we again disassembled our gear and packed it up. On the ride back to Colona we saw a pod of about six dolphins. Three other boats full of divers and snorkelers were in the area, and all of the boats started to circle around and everybody whistled, shouted and clapped to get the attention of the dolphins. Very cool. 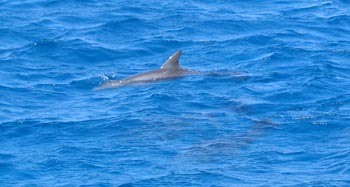 We decided that we would dive with Colona again on Tuesday, and thus could leave our scuba things at the shop. We got a bus ride back to the hotel, where we both showered and rested for a bit before venturing out again.

In the evening we had a very long walk all the way to the newly opened Hard Rock Café, deep into “New Hurghada”. Arthur bought a map of Hurghada at a pharmacy and the guy inside told us HRC was only a 10 minute walk. Instead, it took about 90 minutes to walk all the way, mostly over an extremely wide promenade which runs along the main road past many other restaurants, shops, resorts and clubs. We arrived at HRC exhausted, and enjoyed a great meal with the usual nice HRC atmosphere and extremely friendly waitstaff. After our meal we took a minibus back to the hotel and fell into bed.