We took a cab in the morning to El Dahar, the oldest part of Hurghada. We intended to walk around and take in the sights, but what we saw of the old town was mostly just run down and there wasn’t much to see. After about a half hour of exploring and poking our heads into a few shops, we took a cab back into Sekala. We bought some souvenirs and t-shirts, and had a drink on the terrace of an Italian restaurant. We wanted to order food, but at 11:30 it was too early. About a half hour later we found ourselves in front of KFC and couldn’t resist the lure of real coleslaw. So we had our last meal in Egypt at the KFC in Sekala. 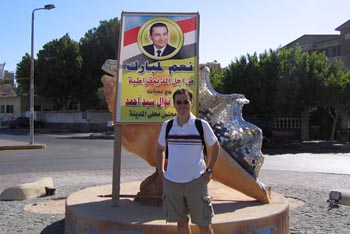 We had to hustle back to the hotel to make it in time to catch our bus back to the airport at 13:30. We stumbled into the lobby, sweaty and panting, at 13:20, to find our travel mates were already boarding the bus. Our timing was eerily perfect. We got our bags onto the bus and found two seats near the front. At the airport we checked in our bags and found a place to sit. Prices of food and drinks and even the toilets were about 5 times more expensive than in town, it was incredible. We each changed into fresh clothes and waited for our gate to be named. 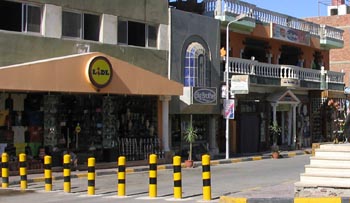 Boarding was a bit late but otherwise things moved smoothly and the flight back was pretty good. We were in a newer plane which did not require as much encouragement as the one we had on the flight into Hurghada one week earlier. Again as there was no entertainment we kept ourselves amused with the P-2000, Game Boy, magazines, and books. I read about 100 pages of “A Walk in the Woods” by Bill Bryson. The meal was the same as on the first flight.

At Schiphol we had a half hour delay deplaning, as they had a problem getting the walkway connected to the plane. Our luggage arrived fairly quickly and we headed for the trains. Unfortunately there was construction work on the tracks between Schiphol and Leiden, so we had to take a bus into Leiden. At the Leiden train station we picked up some pizzas to heat up at home and some Coke, and found ourselves a cab to bring us home.