Our boat this day was El Naghi, and our first dive location was South Point. Our DM was Ina and we were joined by two other divers, both of whom were much more experienced than us. It made me a bit nervous, and I hoped we wouldn’t slow them down. But one of them had a horrible problem with her buoyancy, probably due to wearing a 7mm Farmer Jane wetsuit without a jacket, making her legs very light and her arms very heavy. She practically bounced along during the entire dive with her head down and her body at a 45 degree angle (and made us feel pretty good about our buoyancy control). Ina pointed out two Giant Morays, but Arthur didn’t see them. Arthur spotted a purple and white Pipefish, which I missed, and which we have not been able to identify. We also saw a Devil Scorpionfish, and lots of Masked Pufferfish and Trumpetfish. Again I brought the camera but the batteries died very early into the dive. At sixty minutes, this was our longest dive all week. 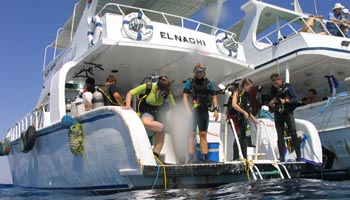 Amy getting ready to jump in

The second dive of the day was a drift dive at Gotha Abu Ramada West (‘The Aquarium’). I left the camera behind, because I didn’t want to open the housing on the boat (for contaminants), but also because we all had to jump in the water within seconds of each other from the boat as it slowly puttered along. Normally Arthur would jump in first, and I would hand the camera to him. This was a nice and relaxing dive, again with Ina and the other buddy pair / couple. Unfortunately, Arthur and I noticed too late that we accidentally had switched tank/BCD/regulator. I noticed about five minutes into the dive that I had a regular mouthpiece in my mouth, instead of the comfobite-style mouthpiece I had been using all week. I showed it to Arthur and demonstrated that I had to hold the reg in my mouth to keep it from falling out. Arthur hadn’t noticed, but when I showed him, he pretended to gag from having the larger mouthpiece in his mouth. He used to have a comfobite on his snorkel, but it always made him feel like he had to gag, so he got a regular one. In any event, it was a good dive and we saw many reef fish plus a rare Red Sea Walkman. I spotted it and pointed it out to Ina, who was obviously delighted and went out of her way to show it to some other DMs before we moved on. 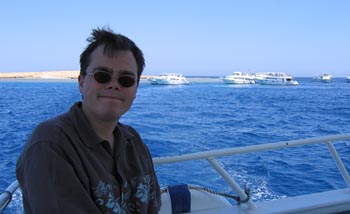 For dinner we walked into Sekala again and ate at the Fish House. We each got a white fisherman’s hat as a present, which I enjoyed very much. The food was pretty okay too.