The first dive on this day was at Fanadir North. We were on the Queen Samira again but this time with a new DM, Waldek. We went down with five other divers plus the DM. Visibility was not what we had gotten used to in the previous days – we could only see 10-15 meters and sometimes lost track of Waldek. We saw one Giant Moray and a Broom-Tail Wrasse. Arthur spotted a Moses Sole when another diver in front of him blew up sand with one of his fins. The Moses Sole was exposed for one second and then buried itself in the sand again. By the boat at the end of the dive we found ourselves in the middle of a huge school of millions of small, silvery fish. The fish were riding the waves and the large groups were undulating as if one. 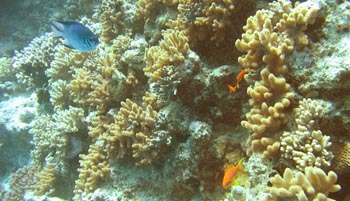 Other divers on the boat were dropped off at a different place than we were. They were using torpedoes (propulsion devices). There were some dolphins in the water around them. When we tied onto the buoy at our dive spot, there were two other boats already there, and two snorkelers in the water. There were also some dolphins here, and at one point the people on the boats were trying very hard to get the attention of the snorkelers, because a dolphin was following them! It was neat to see and we hoped we would see dolphins when we were in the water. This was at Fanous East. It was a pleasant dive, first over a coral garden and then back to the boat via the reef wall. We saw a Banded Snake Eel, and a pair of Burrfish (possibly Spotfin Burrfish) in the distance. Again our DM was Waldek, and we swam along with the same group of 5 other divers from the first dive. We kept looking up for dolphins, but we never saw any.

For dinner we walked to Pizza Hut in “New Hurghada”. Afterwards we had some ice cream from the adjoining Baskin Robbins. During the walk back home we bumped into a nice British couple who were just starting their vacation. They asked us how far it was to the Hard Rock Café and when we told them it was about an hour walking, they turned around and headed back to their hotel, so they walked with us part of the way. They were going to join a liveaboard the next morning, after having completed their PADI Open Water and Advanced Open Water the year before in Gozo (Malta). They wanted to hear about all we had seen diving in Hurghada. The woman was relieved to hear that we had not seen any sharks.